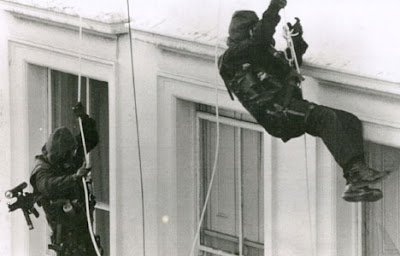 A group of regional autonomists from Southern Iran stormed the Iranian Embassy in London and demanded the release of prisoners and safe passage. The target was an intended echo of the Iranian seizure of the US embassy in Tehran which was still ongoing at this time.

With the British tradition for not dealing with terrorists (shown up as false given the secret negotiations with the IRA), Prime Minister Thatcher refused to allow them safe passage. While any embassy is protected under the Vienna Convention as foreign territory, (see ‘Operation Nifty Package'), the Iranians believed the whole thing to be a stunt staged by the US and UK in retaliation for the Tehran hostage crisis and refused to cooperate in any way, which saw Thatcher resolve to treat the situation according to British law and resolve it she may.

On day 6 of the siege, the terrorists reacted to the lack of response to their demands by shooting a hostage, an act which always changes the game. The siege was now transferred from the auspices of the police to the military (a power enshrined by a 1964 amendment to the Emergency Power Act, unlike the off the cuff decision to do similar in the 1911 Siege Of Sidney Street). The SAS (Special Air Services) were called in to break the siege and rescue the prisoners. We saw startling images of men scaling the building on wires and going in through windows.

Of the 25 hostages, just one was killed, while 5 of the 6 hostage takers were killed. This was the first time the SAS emerged into the light, but my abiding memory was of one SAS man who had got his foot caught in his grappling wire and was dangling upside down outside the windows of the Embassy. However I can find no visual evidence for this on the internet, which makes me think it’s been airbrushed out of history by those looking to maintain the SAS’s infallible reputation. This despite the breaking of the siege being broadcast live on the two major television channels.

Posted by Sulci Collective at 08:04