It was old-style graffiti. Before it became an art form. If you can call a canvas solely consisting of the artist’s signature, his brand, his logo, his spoor, ’art’. This was spray painting as a tool of communication. Mural messaging. Words rather than calligraphy. Plaintive or outlandish.

Walls have always provided a surface begging inscription. Whether thrown up to keep others out, keep your own in, or just to hoist up numinous edifices inviting God in. In the atrium to God’s chamber, Jews write their messages and prayers on paper, rolling them up and inserting them into the mortar of the Wailing Wall rather than profaning it directly. The Wailing Wall, one of just four retaining walls retained. A remnant. Yet each ersatz prayer scroll mulcts a wisp of that mortar, so that at some point of critical mass of the entreaties of a people, the Wall will collapse. Not from weight, but from lack of coherence.

Closer to home is another wall, that is currently being dismantled brick by brick beneath sledgehammers brought from home. A people united. Families gleefully repatriating themselves into the bosom of loved ones not seen for a couple of generations. One side of this wall was directly graved upon by ink and the blood of those shot trying to scale it. The other was inscribed with graffiti, an expression of freedom of speech and a plaintive plea against conflict, division and injustice. After the initial flurry, I returned nightly to secrete away a couple of the bricks and add to my burgeoning collection. Only those with graffiti on, hopefully none with captioning blood. Few of the bricks were intact. Words sawn off by a hammer blow.

I moved around the pieces in my collection. Trying to form new words from the serrated letters. Coalescing new slogans. Reminded of my toy letter bricks as a child. Though there, each brick was only stamped with a single letter per face. Multiple bricks stacked in order to construct a word. A word that could be subverted, simply but turning another face of the brick to face front. Surprising words when the edifice was read as an acrostic. But these fragments were not hewn smooth enough to sit on top of one another without cascading back down.

I made mosaics of the bricks. Moved them around one another to form blotches of colour. My wall was spelling out the new freedoms. Or perhaps the new repressions. When a dividing wall comes down, somewhere on the earth another one goes up. I hear Mexico is to have one. And of course, the Wailing Wall has its modern accompaniment all around the biblical borders of the nation that last existed when the Wailing Wall was intact. Strange geographies. Anomalous echoes from history.

For every wall, there always have to be wall builders.

Pink Floyd - "Another Brick In The Wall"

Mickey Dread - "Break Down The Walls"

Tom Robinson Band - "Up Against The Wall"

From the Berlin Wall 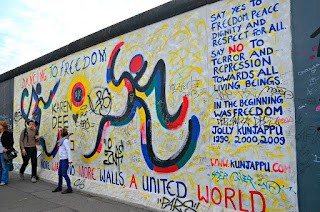 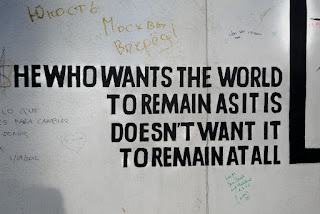 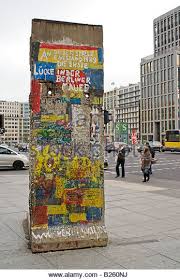 Posted by Sulci Collective at 11:43 3 comments:

The webbing between our toes and our innate ability to swim as a neonate, swiftly disappear as we begin to ground ourselves in the world.

When our gullets are no longer reliant on being coated by our mother’s milk, the sounds shaping words can start to form, but in doing so we lose our singular pre-vocal communion.

And until our infant eyes and brain can attest to the material permanence of an object, babies are blessed by not being immured in fixed notions of reality.

And on entry into the world, we surrender our immortality and start approaching death.

Posted by Sulci Collective at 22:16 No comments:

It was easy for the Fascists to insinuate themselves into the street unrest. They just donned the same Guy Fawkes’ masks as the ultra-democrats. Their own death’s head insignia was more discreet than the skull and crossbones of the pirates and anarchists and more anatomically correct, as they went on unerringly to prove with their clubs and bludgeons.

Their first act in power was to pension off the old queen. The beloved crone was replaced by a sixteen year old and to solidify her ascension to the throne, the government cut off the internet and tore down phone masts. Sovereignty established with a steampunk aesthetic.

They ensured this English rose's throne was outsized so that she couldn’t cross her legs as they photographed her with fisheye lenses from floor level. They had her cupping the testicular orb and lubriciously gripping the erect sceptre. They forwent silhouetting, so that men could lick the back of her head when sticking her stamp on a letter, or by stretching out the crinkles in banknotes they could make her flash her pudenda. And when the rape fantasies projected upon her wrought her haggard and drawn, they simply replaced her with a clone. The Royal Line now secured for all eternity, the preservation of pure autochthonous genes sealed.

They needed no grand gesture to establish their new power, for they didn’t have to blow up Parliament, merely let it crumble away beneath the erosion of the River Thames. However as was their wont, they remained preternaturally superstitious. Accordingly they culled the ravens in the Tower of London to signify a thrusting new kingdom dissevering that of the past. But synchronously the red rose standard and emblem of England was struck by a blight, never to return to the soil of the land, while the Barbary Apes left Gibraltar’s rock to underscore the end of England’s last colonial vestige, gobbled up by the mythic European superstate. Scotland, Northern Ireland and now Gibraltar, a small price to pay for recovering sovereignty in English eyes.
Posted by Sulci Collective at 13:05 2 comments:

Posted by Sulci Collective at 15:24 No comments: