No longer able to see your fist in front of a whipping boy's punchbag face. No warning glint off the barrel of an improvised shank.

Yet there is plenty defiance of circumscription and the circadian all around. Both conscious and unconscious.

Calloused hands cradle listless cocks, in order to foment some warm milk to carry them over into languor. The darkness matches their own played out inner visions.

Denied both sun and dial, junky horologists listen to the whirring of their body's broken cogs. Trying to calibrate for their midnight feast. The nodding gateway into the land of nod.

Even among those who have succumbed to bromidic conformity, an ease of repose is far from reached. Cavernous shouts gouged from deep within sleep. Sonorous screams wrung from nightmares. Moans rent from all sorts of involuntary persecutions. One-sided catechisms with demons and incubi (a distinct lack of succubi for this benighted company. Least of all the spectres of those women they rendered into ghosts by gun or fleshy garrote).

The most serene may in fact be the psychopaths evenly poised in the slumber of both the just and the unjust. Or those schizophrenics restful in their dreamscapes, where any extraneous voices blend in unobtrusively.

Those superficially at peace, still subconsciously suck their thumbs. Reach out for their mothers in their stupor. These hardened men, off guard and off the clock. For eight hours they can sleep secure that they don't have to plant their backs anywhere more unforgiving than a lumpy mattress. That these eclipsed of society, at least for the duration of the moon's lazy eyed winking around the earth, can rest easy from the indignity of being preyed upon by one of their own kind.

Except me. For I am a nocturnal animal. I need to be abroad when it's dark. Rather than a caged tiger. My keen senses itching for some external movement to latch on to. To snuff out and extinguish. Mentally I pace my cell from the confinement of my bed. I do have a cell mate snoring in the bunk above me. Gulping insufflation of his nightly dose of guilt; absolved with his glottal expulsion. Movement of a sort.

Only I determine when the lights go out.
Posted by Sulci Collective at 16:34 26 comments:

Every town has one. Or one at the very least.

A patch of unhallowed ground. Some forlorn stretch of shattered tarmac. The pockmarked wasteland.

Terrain once staked out by man, now ceded by him. Bereft of signature jetsam, the condoms, syringes and empty rotgut bottles indicative of an agonised withdrawal.

Yet within an urban jungle, Nature does not make so bold as to reassert her dominion. Dereliction's removal men seemingly having thrown petrifying dust sheets over these fixtures and ill-fittings. The mosaic of the pulverised concrete, akin to the pebbledash cast of the surrounding building walls. As if the scene has been turned on its side. Even rootless litter appears to have been nailed down in permanent display. Blown from pillar to post, this particular spot has been deemed refuse's final blotching place. A potters field for the non-biodegradable. Devoid of potters and any living organisms at all.

Notionally delimited by the chain-link fence. But the border is indeterminate, for the fence has been trampled down. The negative space between the twisted metal links presents the only barrier now. Bayonet reeds jutting through these apertures. Chlorophyll halberdiers, braided with nettles and brambles sagging under their load of barbs and thorns. Sapper tripwires for where no feet ever tread. Tributary Nature's token conscription all present and correct, yet unable to advance any further. Held in suspended animation, just like the metal and brick all around. There is no nourishment to be derived here.

A brick building with entrance boarded up and all its windows put through. Thick gobbets of crystallised glass, a sheet laminate atop the torn up concrete. Razor wire lines the low roof. Strips of fabric and plastic bags snagged on its barbs ought to billow in the disdainful drafts, but they too are pinioned fast.

Aloft the building, a boxy metal housing. An air conditioning unit or electrical generator. Here where nothing respires, nor is any drawing of energy invoked. The caged blades are fossilised, like silted anchors dredged from the sea. Clamped to the building's walls, some outsized toy duct piping. Terminating in a chimney of simple geometric lines, a scaled down version of a watchtower at Auschwitz.

In among all this stasis, there is yet one outpost of movement. At the very verge of vision, something flaps fitfully, with just the faintest of feathery deviation from the rigid and the upright. Playing breeze-borne peek-a-boo from behind an unencumbered fence post, a bouquet of cut flowers. Desiccated. Mummified. Lifeless like everything else in this rubblescape. A fitting tribute to that other importation. The murdered little boy dumped here yesterday, today or last month. The forsaken living memory here can't quite recall.

Every town has one. One at the very least.
Posted by Sulci Collective at 22:55 30 comments: 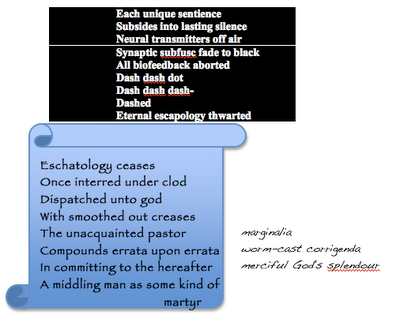 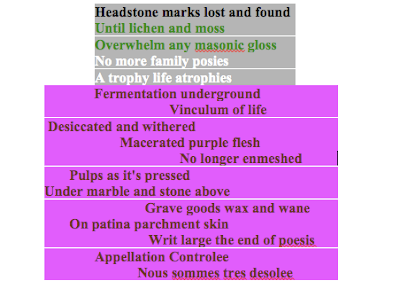 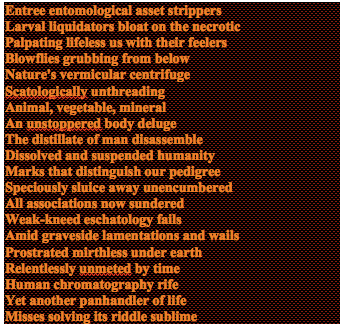 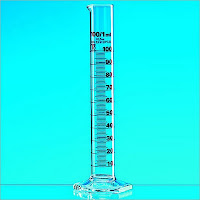 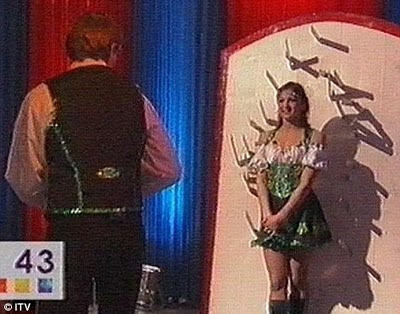 Husband and wife duellists whetting their custom weapons. As usual neither has any Seconds, no one to rein them in and make them see sense. No feud-fatigued child savant to bang their infantile heads together. Ding ding, seconds out, round on one another. Roll up, roll up.

His tongue rolls the acidic spitball around the crevices and cavities of his mouth. Shaping and casting the verbal stilettos. Honing the precise dimensions of the intended words. Filing and grinding against his teeth. Ready to launch and thrust. The palate sheath withdraws, the acuity primed to cut

To the quick, yet not to the core. As in any quarrel, the aim is to wound but not fell. To pin down without impaling. To notch the unimpeachable point of an argument, not to clinch a lifetime of detestation. Delicate balance and distribution of point and edge. He fixes on aiming for that ridiculous kiss curl that mocks him from between her eyes. If he could snag that particular quintain, she would perforce have to tug her forelock and concede. Of course there is so much petrochemical gunk lining her head already, a single loose spark emitted from his cold metal barb... 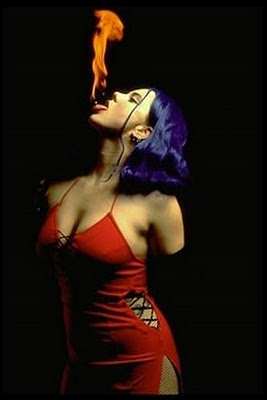 And she too is firing up her arsenal. Liquid accelerant lapping around her quivering mouth, working up the necessary flammability. To go incendiary on his hind quarters. Arse! This was going to be a big time blow up. Lardy! Quarter neither asked for nor given. And so it begins. Cocktease!/ Cockfeather!

He lashes her to the revolving wheel in his mind's eye. Echoes of historical Inquisitions. When stilled, it facilitates his aim, training his trajectory along sharp lines for honed blades. But when that gash of a mouth of hers has built up sufficient steam, spinning wildly so she becomes nothing but a blur, a whirl of perpetual motion, he is charged with a far more hazardous plunge. She becomes a girandole of complete unreason. Snuffing out all further susceptibility. The pommels of his verbal daggers flapping with cartoon reverberations, having missed their mark. Dabbing uselessly in the air, like the snapped limb of an animal

She has her fire started now. Eternal conflagrations billow from the everlasting brimstone of her forge. Freshly quarried by her blistering tongue, seeking to spit-roast him for quarry. Her fierce heat singes his eyebrows. He hefts another knife to slice through the air at her heart. Cockroach!/ Coward! / Vermin! / Dung beetle!

His salivary salvo is unleashed. Whore! Meets hers head on. Limp dick! His words condense in her heat, vaporised with a tutting hiss of steam. His cutting edge tempered. Temper, temper, you're showing your hand. You got nothing Mr Limp wrist. That quenches him. Brittle now. Well you'd know, you wrote the book on temperamental. With the emphasis on the 'mental'. Temper, a double-edged word. Fit for an outburst, an unhinging of passion such as this. But also a mollifying, a soothing. A middle way.

Blunted, forced back by the heat, he must acknowledge the middle way to be her way for today. From knife thrower to sword-swallower. Forcing him to eat his own words. Falling on his own sword. Maybe not, a final parry possible; Make-up sex? he tentatively proffers.

She glares him down in flames. 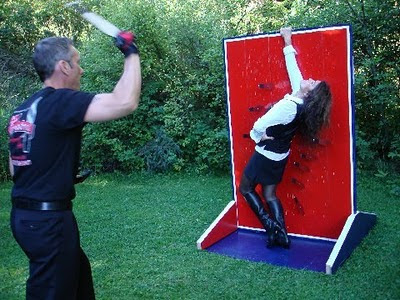 This story appears in my first Amazon Kindle collection 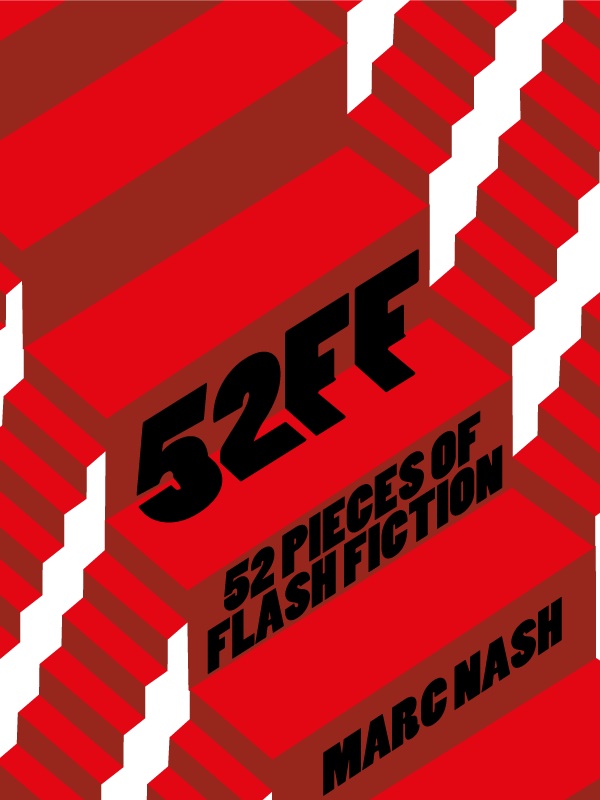 Click on this for a troubling video of a knife throwing mother...
Posted by Sulci Collective at 22:05 22 comments: