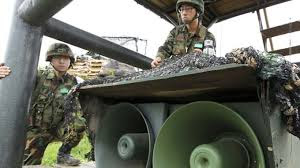 When BFF’s fall out. President of Panama and drug kingpin Manuel Noriega was finally felt to be  such an embarrassment to the US, they moved to depose him in “Operation Just Cause’s” 1989 invasion of the country. Noriega took refuge in the Vatican’s Embassy and the US were faced with the legal and reputational problems were they to mount an armed assault of de facto Vatican territory. Instead they set up loudspeakers and cranked out a 24-hour barrage of tunes such as Guns N Roses “Welcome To The Jungle” and The Clash’s “I Fought The Law (And The Law Won)” as part of a PsyOps campaign to break down Noriega’s resistance. After 3 days they desisted and later admitted the whole idea had been “a low moment in US Army history… silly, reproachable and undignified” (National Security Adviser Brent Scowcroft). In the end Noriega did surrender himself after 10 days, not due to the US’s persuasive efforts, but those of the Vatican ambassador himself, employing some considerable psychological tactics of his own, despite the 8th commandment against misrepresenting the truth to others. He had threatened to up sticks and set up a new Embassy in a Catholic school, thus de-sanctifying the Embassy’s grounds in law, which would allow the Americans to move in on it.

This was possibly the first time the term PsyOps entered the public domain and music was to feature as a weapon again during the interrogation of prisoners in Iraq and Guantanamo, a playlist that included Metallica’s “Enter Sandman” and “I Love You” from kids TV show “Barney”. Metallica, a band notorious for suing for lost royalty payments, even taking on their own fans in copyright battles, however seemed perfectly happy for their music to be played in torture sessions.

Perhaps Julian Assange holed up in the Ecuadorian Embassy in London had better watch out, lest our authorities start blasting the likes of Sam Smith’s theme song for the Bond movie “Spectre”, some of Wiley’s Grime tracks, or the “Go Compare” advertising jingles on an endless loop to fill him with a sense of futility and make his ears bleed. I don’t have any music used in my scene of a siege in my novel, even though Nancy Sinatra’s “These Boots Are Made For Walking” was blasted out at the siege of Waco upon which my siege was based.