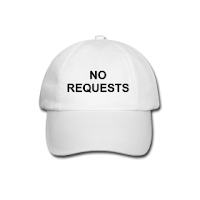 Here is the passage introducing DJ SlipMatt, one of the  main characters of the novel:

Even when not armed with a pictorial pocket guide to the urban phenotype, you could still tell he was a DJ. He had one hand clamping a headphone can against his ear as if it were a conch shell and he was divining for an ocean of sound through it. He also had a pair of light-up rave glasses, which in his case was a double affectation. Seeing as he had an angle-poise lamp, well, poised over his shoulder. Plus that the battery had long expired in his specs, though he either hadn't noticed or just couldn't spare the time to change it over, unlike changing the records on his turntables in a blur of motion.
Though effaced behind the decks, console and transmitter rig in his bedroom, his T-Shirt was of a full-sized twin-tape reel and assorted dials, buttons and analogue gauges, picked out in metallic silver against a black background. It looked like the innards of a cyborg and more alarmingly perhaps, in the dull, spectral light of the room, that they formed part of his own actual anatomy. Around his neck was a bandana, while on his head squatted a baseball cap at an incline that defied gravity. It was said by those who caught rare glimpses of him, that it must have been the static electricity that surrounded him all day which held it fastened in place. The cap bore the imperative 'No Requests'. However, since the cap was perched on his head backwards, peradventure someone did advance upon him appointed with a request, the pre-emptive prohibition wouldn't be visible to them. Therefore it could only fail in its purpose. But then the whole rigmarole was perhaps somewhat redundant. By reason of there being no one else in his box room. And, that given its dimensions, nor was there likely to be. Any self-respecting DJ had played clubs with bigger DJ booths than this room. But then it was questionable how much self-respect DJ SlipMatt possessed.
The wall mounted clock was in the shape of a record turntable, the numbers marked along its circumference. The clockface dial was what revolved, whereas its hand in the form of a tonearm stayed fixed in place. Armed with just this one pointer, the clock only counted off the hours. Which was somewhat odd for a DJ reliant on getting his split second timing right as he transferred from one deck to another, or mixed in a beat. He adjusted the angle-poise lamp so that its glare didn't flood wash his bank of monitor screens. The hacked feed from all the CCTV cameras on the estate fed into here. He clicked the bulging eyeball sat in a bloodshot sclera that was his computer mouse, in order to change the selection of cameras on his screen. Instantaneously the grid filled with sixteen new images at different slants of projection, like a Cubist painting. SlipMatt silently pronounced himself content with what he witnessed and slotted the headphones over both ears, with the headband hanging down from the back of his neck like a yoke. He started bobbing his head as he scrabbled around on the desk in front of him for something.
The room itself was a garret beneath sloping eaves which ate into the living space. SlipMatt could only properly stand up in the very centre. Otherwise he had to hunch over. Which seldom presented a problem, since his natural bearing was sat clustered around the electrical equipment on his desk, as if he were hoarding it into his chest. Every single square inch of flat space was submerged beneath some electrical kit or other. CDs, cassette tapes, Dictaphones, Discmans, Walkmans, mobile phones, pagers, mini-discs, cartridges, DAT tapes, spools of tape, magnetic tape, hard drives, RAM memory, flash memory, microphones, microphone stands, cabling and a wide array of batteries of every shape and size. The only oasis of order, was that all the vinyl records were up on shelves propped precariously between the sloping eaves.
If Noah's Ark had preserved every single animal on earth, this was its audio equivalent. The history of sound recording lay entombed yet uncatalogued here. The stilled cacophony of voices from the past. Some people retain their teddy bears or significant other soft toys as a link to their childhoods. Some of those teddy bears are so old they have their cotton stuffing leaking out. Electrical recording devices were SlipMatt's cuddly toys, his transitional objects and many had their tape or other innards leeching out of them.
SlipMatt discovered what he had been in search of. With nimble fingers he rolled a spliff and licked its ends sealed. He left it unlit in his mouth, while his hands danced around twin record decks. The hopeful entreaty of Frank Sinatra's 'Fly Me To The Moon' was being bombarded by the payload of some Audio Bully's 'Shot You Down' dropping from the other turntable. Since the Bully's record had sampled Nancy Sinatra under some heavy phat beats, father Frank was going up against his daughter. SlipMatt faded down the heavier bass and inclined into a microphone ensconced beneath a baseball cap with a jewelled skull design. He liked how the fabric muffled his voice. He further delighted in how the skull's gems winked at him as they diffracted the meagre light. He let Ol Blue Eyes have his lingering moment in the 40watt sun of his bedroom-cum-studio. Or its moon. Fill his heart with song indeed...