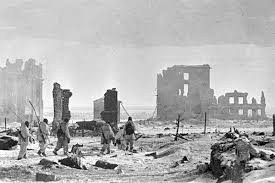 The siege that turned the tables on the besiegers. Stalingrad was of little military or strategic value, yet Hitler was hellbent on obliterating it from the map, probably because it bore the name of his arch foe Stalin. The Russians forces were surrounded, but managed to keep sending in troops through the river Volga’s access into the city, just long enough to hold out until winter. The Russians then launched a counter-attack in November, punching through the Romanian and Hungarian allied forces of the Germans and were able to complete an encircling movement so that it was now the Germans pressed back into the city.

The same bitter fighting continued as before, but now the Germans were unable to supply their forces, nor could the airforce be brought into play with the zero visibility of snow storms. Despite constant petitions for the army to fight their way out of the siege, Hitler refused his troops from leaving the city. They were left to rot there, suffering from the twin assaults of the cold and starvation in addition to Russian attacks. Stories of troops eating their own dead supply horses abound.

After five months General Von Paulus negotiated a surrender with the Red Army and the tide of the war had turned against the Nazis. At Stalingrad, they had lost an entire battle group, one of their three in the whole of Russia and never fully recovered their strength, while further weakening the Western Front defences to bolster the Eastern campaign. In all up to two million lives were lost at Stalingrad, including civilians trapped there.