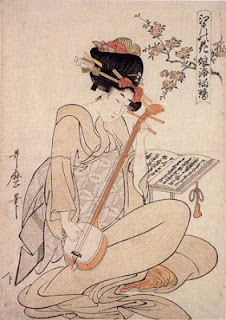 The geisha strummed the three strings of her shamisen for her Samurai master. The instrument's body encased in catskin that held the sweet vibrations like a purr. Its silk strings fashioned of the same material as the kimono in which she was draped. Three ivory pegs chorusing the hairpins shaping her high chignon hair. The three strings rubbed against one another to conjure up the sound of a whole hive of bees. The plectrum caressing against the body to conjure the rhythms of the hooves of her master's horse. Her fingers palpating the frets to make the instrument sound like sweetly dripping honey.

She was his flower in the pleasure quarters and his willow throughout the rest of the house, as she fed his soul with poetry, dance, calligraphy and grace. At night, to preserve her elaborate hair pinned with turtleshell, she slept with her head on a block and a bed of rice around its base to alert her, were her crown to roll off the wood.

Then came the American bomb clouds that momentarily blotted out the sun and stripped all the leaves from the trees. Those birds not in its vicinity, till crashed in their flying, as they conceived night had descended. The bees disappeared. Turtles retreated inside their shells never to resurface from their hibernation.

Now her silk kimono sat uncomfortably. She could feel the silk writhing over her body, as if the worms sought to reclaim their cocoons for their unborn broods. The shimasen's silk strings came away from the catskin body, as they too protested their indenture. Her master took his pitiless steel and rendered Seppuku. His insides unravelling like the insurgent strings on her shamisen. Her tresses escaped their turtleshell grips. No more of flowers and willows. A perpetual winter had eclipsed Japan's ever rising sun.

The silhouette of an American GI stood behind her shoji. He slid the screen door back, his bulk dimming the whole room. Save for the corona of light from the burning tip of his cigarette waxing and waning as he breathed heavily. Try as she might, she couldn't convince herself that it was a firefly in the night attracted by the scent of her hair's pomade. 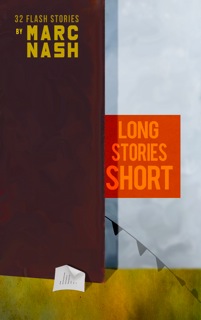 Posted by Sulci Collective at 16:11

Neat twist on the idea of an eclipse, and this was such a sad tale of an unravelling world. I guess we sometimes forget the human impact of our actions.

love the echoing threes - like the san san kudo sake - three sips from three glasses, both bitter and sweet

As always Marc you paint a supreme picture! I could feel the relaxing grace of her position and then the melting of that grace. Excellent!

Beautifully written Marc. The details are haunting. I liked the image of the GI's cigarette and her wish that it was a firefly. Poetic and devestating at the same time.

Lovely descriptions, even though many of the words in the first paragraph meant nothing to me as I havnt encountered them before lol.

Lovely ending aswell, I like the cigarette waxing and waning as the GI breathed, incredibly effective.

Loved the calmness of the geisha and master's world, so sad the devastation brought by the bomb.

Powerful stuff - a glimpse into a different world - great writing

Amazing details! This is so vivid in colour and scent it's just a pleasure to read over and over again and follow every trail the creatures take in their desperate attempt to escape; though it delivers sadness and harsh truth, it still is a beautiful piece Marc!

Unexpectedly linear, Marc, and fraught with personal details. Dug reading this before bed tonight. Thanks for sharing!

Very well written and powerful story, evocative and layered with detail and emotion. A great achievement, very much enjoyed this.