Review - "The Desire Machine" by Arbonauts

Decades ago I went to a lot of dance and physical theatre in London. I tried writing in the hope of working with some of its practitioners. I even attended conferences about the relationship of both to conventional theatre. As my own artistic interests changed I drifted away from stage performances and stopped going to such events. Arbonauts' new show was a welcome re-immersion in that world and brought back much of the awe and pleasure I used to derive from such spectacle.

First the space, a shaft servicing Brunel's tunnel under the Thames at Rotherhithe. Entrance through a low door, admitting one audience member at a time. Inside the venue, a music soundscape designed very precisely to meet and fill the angles and recesses of the brickwork. It might have been interesting to move around the space and experience how the sound worked differently within the various pockets, but the 'auditorium' was too crowded to have the chance to do this. Centre of the space was an erected carousel with round disc floor and cables to form part fairground ride, part birdcage.

The performance started with some aerial work amidst the cables, the lighting working well to blur the outlines of the performer, their sinew blurring with the cable so one becomes indistinguishable from the other. I was very much put in mind of Steven Berkoff's company's extraordinary performance of Kafka's "Metamorphosis" and that insect's aerial movements. 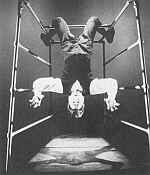 And later when the lights are more powerful and you chance to look up at the brickwork to see the giant projected stages from the stage, you're put in mind of the filmic "Nosferatu".

But for me the real tours de force came from the dance and movement of the performers on the ground. The first deeply involving tableau was when a bridal gowned Rachel Alexander stood stock still in the centre of the rotating stage, just her arms stretching out as part inviting embrace, part clock hands. two other performers moved subtly shaped by her orbit, with exquisite precision when in close proximity of the bride, manipulating the space between these two bodies between intimacy and disinterested proximity. I have always preferred angularity in dance to smooth, sweeping curves and I delighted in the spectrum of flections of both performers and the space between them.

But the highlight of the whole show was the performance by Dominique Vannod, angularity supreme across her body as she moved on all fours trying to conquer the restraint of the turning disc. The sharpness of her bones (shoulder blades, wrists etc) jutting through the skin in seemingly impossible ways was breathtaking. It conjured both insect and some larger beast, suggestive of being multi-limbed and not just restricted to the normal two/four of the human. Simply spellbinding. 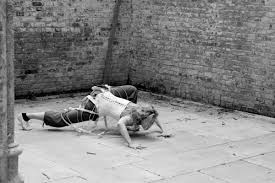 If I had a quibble, it was with the snatched phrases of dialogue which i just felt couldn't bear the weight and intensity of what was taking place on stage. Even though these were taken directly from the source book, Angela's Carter's "The Infernal Desire Machines Of Doctor Hoffman", phrases like "I am my own self-antithesis" just seemed trite to my ear. But then maybe that's just the ghost of the old writer for physical theatre rising in me again.

Posted by Sulci Collective at 12:43