I opened my email and there it was. Exactly a month to the day that I'd hit send. I may have sweated blood to meet my deadline for delivery, but the response seemed goadingly effortless in its precision arrival.

I always hated this moment. Even though it always redounded to my benefit and I usually could find nothing to argue against, not even for the sake of form. I downloaded the attachment. My original manuscript, though after this metamorphosis at the steadfast hand of my editor, could it still even be said to be mine anymore? The truth about my fiction lay at hand, highlighted on my desktop.

I think I was probably squinting through half-closed eyes such was my trepidation. Track changes was harder on the eye than the editor's former method of red pen. For such a stickler to the pre-determined standards of grammar, she wasn't averse to adopting the new technologies. My eyes could barely take in the text. It seemed to be dancing on my plasma screen before me. I blinked my eyes to clear the fug. The letters were still spinning, melting and mutating. What's going on here? No word seemed to stay still long enough in its arrangement of letters for me to be able to read it.


Damn, seems somewhere between her computer and mine, we'd contracted one of those viruses beloved of Microsoft Word that ensconces itself in the macros exchanged like lovers’ fluids. I immediately hit my anti-virus clean up app and trashed the document and purged it forever from my computer. I picked up the phone and dialled.


"Hi Gil". Now my editor was never one of those profuse in warmth or who called all her authors "Darling", but she sounded remote even for her. The voice resonated metallically.


"Look, I think you accidentally passed me a virus when you sent my manuscript"


"You got it alright then"

"No, I don't think you-" she sounded like she was calling from a railway concourse or something. One of those big open spaces that compresses the voice and scoops up all the background noise as screams and shrieks. Only I was sure I had called her on her office landline...


"It's settled down then?" she intoned.

"What do you mean 'settled down'? Is it just some new formatting thing?"

"No, it's only about the words and letters"

"What are you talking about Clara?"


"The Guild of Editors grew weary of receiving an endless stream of poorly written and composed manuscripts, fixing them up, or rather saving them, turning them into publishable books all with receiving nothing more than a thank you in the acknowledgements-"


"But that's your job. And thanks for saying we authors can't write". Again those high pitched, distorted squeals in the background. With plenty of banging. Was she at a child's birthday tea party? Who'd ever let her near children?

"So we did something about it. We developed an app that would mend your manuscripts with the minimum of effort on our parts. It takes your texts and runs its own analytics on the words and edits them. We call it the ‘Hundred Monkeys and their Typewriters’ app"

"Is that what I can hear in the background? A monkeys’ tea party?"

"Of course not. It's a silent computer app"

"Well what is that noise around you? And why do you sound so... odd?"


"Goodbye Gil. It was nice working with you". She hung up. What did she mean by that? Whatever lay behind it might explain why she was sounding so distant. I decided to take her at her word that it wasn't a virus and once again downloaded the manuscript from her e-mail and opened it.

I stared bemusedly at the jumble on my monitor. My text so irradiated, that it was mutating. The letters possessing a half-life as they decayed into different words before my very eyes. It was impossible to catch any word before it changed. I started a series of screen grabs to try and capture the process.

Oh this was hopeless. It's just gibberish. Would it never end? I tried ringing Clara again but I couldn't get hold of her. Time to nab me a new editor it seemed. I made some calls, but none of the editors would even pick up. Maybe she wasn't kidding when she said all the editors were in it together. I spoke to a couple of my fellow writer friends, but they couldn't confirm or rebut anything since they didn't currently have manuscripts with editors.


I contacted the Writers' Guild and while they said they'd heard rumours of the Hundred Monkeys app, they sniffily remarked that if anything it had put the editors out of work and that maybe that accounted for the automated sound of my former editor's voice. That she had already been replaced by a machine. My triumphantly human correspondent from the Writers Guild assured me that there would always be a need for authors no matter the black magic practised on out texts by other interlopers in the publishing process, since we were the ones with the creative ideas and drive.

While vaguely comforted, I still needed to decide what to do with my manuscript. While the literary Turing Machine on my computer had finally finished its churning, I just shut it off without daring to peruse its final version. I resolved to self-publish my original manuscript myself, but allowed that it could probably do with one last edit on my part. 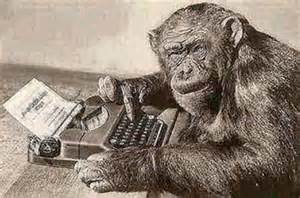 Twelve weeks later and with gratifyingly few alterations to the book, I formatted it for e-publishing. But when I tried to upload it, I was informed that a book with the same title by the same author, to wit me, was already published. Publication date some twelve weeks ago. I bought a copy and started reading it. It was pure filth to be honest. Made me blush. I was struck by an idea and searched out the finished product of my manuscript after the 100 Monkeys' treatment. And word for word it was the same. They had published my book right after this edit. Without any input from me, the writer. The gall of it. My hard boiled thriller turned into this pornography. The only thing was, I caught sight of the book's position in the sales chart. Maybe the Hundred Monkey editors knew what they were doing after all...
Posted by Sulci Collective at 14:31

Sex sells books, we all know that ;)

this so reminds me of that Roald Dahl story where the a man invents a machine to write. I cant remember what it is called again? Anyone remember?

I loved this! "Sugary cock nectar" made me laugh tremendously. Ah, and this is what is actually out there. Fantastic job.

After yesterday's conversation at Covent Garden, this seems..timely.
Oh Brave new world that has such programmes in it.
Brilliant work.
xx

and now I have yet another thing to be paranoid about . . . you managed to plant this fear deep in my cortex - well done!

I've known at least a couple editors who wanted to flip the industry like that...

Interestingly yesterday I read Matt Haig's blog post about writing to make money. I hear echoes here. Do we measure a book's worth only by the amount of money it generates? I hope not. But I suspect some do.

Now this is a true horror story for us authors! Great job!

This was both hilarious and hideous, all at once. It's a good thing I don't use Word, that Hundred Monkeys thing won't get ME! But... but... like Hawksword said, is the worth of a book measured by its sales? I did like how the story ended, nevertheless. The hero can bank his earnings and self-publish (perhaps under a pen name) hereafter.

So that's why there's so much crap out there in the book world. :)
Great fun story Marc!

I'm sure there's something rather profound about the death of art in this, but I was more struck by the humor than anything else!

No monekeys for me thank you! Although that'll explain the charts,yep... bloody apps!

Fun read, Marc, but so, so terrifying and uppseting!

The existence of an application like this would explain a few things, especially a certain trilogy.

Take the royalties (if they ever show up) and self-pub next time, I say!

I loved that the words kept rearranging and mutating even after the email was sent, and that the human editor (if it really was one) was so smoggy about quality when the current state of the industry is your MS had to be about perfect before submission anyhow.