I Have A New Animal Familiar

Six months before I was born, my parents bought themselves a cat. He was an ordinary black, non-pedigree moggy and went on to live to the ripe old age of 23. Once I was moved out of a cot and into my bed, that cat slept on my bed every night until his death, even when I was no longer living at home having gone to university.

He was my animal familiar. Not in terms of he and I collaborating in performing black or white magic, just that we communed with one another and had a deep bond. After he died, I never had such a connection with any other animal, but I did mentally opt for new spirit animals. And here is where I would describe it as performing magic, in the similar manner to the Tarot or I-Ching. Not in any sense of supernatural divination; rather you double down, consider the questions you bring to the table and with the aides memoire prompted by the yarrow stalks or cards, you perform some self-divination and gain some self-insights around the questions you were asking.

So when I say my adopted spirit totems of the tarantula and the vulture, it is purely in this theoretical way rather than that I had with my black cat. While I have stared into the black, black void of a vulture's eyes at a zoo, I certainly wouldn't want either creature perched on my bed while I lay asleep. Both animals served as aides de memoire. Aspects of their physical being and behaviour, allow me to conceptualise and relate back to things about life. I have written flash fiction stories about both, "Eight-Legged Amy" (tarantula), "Rich Pickings" and "Cop Aesthetic" (both vultures), about life, death, rebirth, criminality and war.

But move over guys, a new familiar is in town. Or rather the oceans. For I have become infatuated with jellyfish. One of the oldest species in the history of the planet, these remarkable beasts have a whole host of associations and images that they conjure up. Firstly there is the rather unique case of the 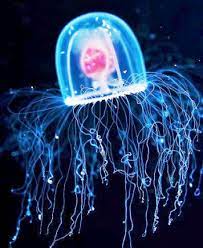 which has the ability to revert from mature adult stage (the medusa) back to its previous stage of the polyp when threatened or in environmental difficulty. This lends us a tantalising glimpse into the possibility of immortality, for as long as it stays in this polyp state, it will not die unless predated upon. To my mind, this argues against the unidirectionality of time and against entropy which underpins it. The erosion of cliffs is taken as proof that time can only flow forwards, since the cliffs cannot reclaim their lost eroded matter. This humble little jellyfish begs to differ.
Then we have the striking case of the box jellyfish. Like all jellyfish it has no centralised brain as we do, and therefore no visual cortex. And yet this jelly has four eyes, one on each corner of its box. And these eyes can at least respond to light and help the jellyfish orient its swimming. To me this offers a fascinating glimpse into how single-cell organisms developed into multi-cellular ones and the complexity of sense perception organs like the human eye; which came first the eye or the visual cortex? The box jelly suggests it was the clumping together of cells into an eye and that only later did it coalesce into forging with part of the brain to render a more sophisticated visual apparatus. 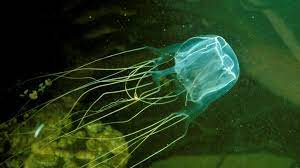 Well may people view these creatures as nightmarish and alien, but here's a reason why we all may need to become more familiar with them. As zones of our oceans become arid and dead due to pollution, the jellyfish move into colonise them, because while their predators vacate, the jellies can survive in relatively low-oxidated waters and are agglomerating into huge swarms. The environmental issues are both illustrated by the very thriving of the jellies and further exacerbated by the damage they wreak in such huge hosts.
There is so much more still to explore about this creature, part animal, part plant. Welcome to my new animal familiar. And no, I would never get in the water with one.

Posted by Sulci Collective at 13:00