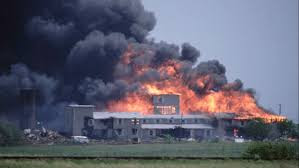 Waco, the game changing siege in the US. With its long tradition of non-conformist communities, and the protected rights of both religion and gun ownership together with a less palatable tradition for cults and apocalyptic beliefs, all of these came together in the Branch Davidian community in Texas who lived in an armed compound over 77 acres in Waco.

Trying to execute a warrant to search for illegal guns, a gunfight broke out with fatalities on both sides. The authorities retreated and thus began a 51 day siege. Finally the FBI decided to end the siege by moving in, which saw 76 cult members die and the compound go up in flames, the cause of which is still disputed. The besieged garnered a lot of sympathy in the face of perceived unjustifiable lethal Federal Government intervention and Waco was one of the causes cited by Oklahoma City bomber Timothy McVeigh.

Waco was the reference point for the siege in my novel, while cults of course are also not unique to the US and the Om Shinrikyo cult in Japan that carried out deadly poison attacks on the Tokyo metro also forms a section in my book.

Posted by Sulci Collective at 08:30