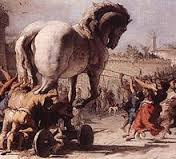 Possibly the most famous siege of all, one that gave rise to perhaps the apotheosis of epic poetry in the form of Homer’s “Iliad” and the lasting image of the Trojan Horse which finally secured victory for the Greek besiegers after ten years of stalemate. Trojan Horse, Achilles' heel, the face that launched a thousand ships, Greek gift and Cassandra, have all passed down into our modern usage, as well as ones drawn from "The Odyssey" such as siren's voice, between Scylla and Charybdis and lotus eaters.

Heroic figures such as Ajax, Achilles, Hector, the quixotic passions of the Gods, the perfidious women such as Helen and their noble antithesis such as Hecuba and Andromache making impassioned pleas to save their children from sacrifice by the victors. All of this has passed down and still resonates over a score of centuries later.

The historical and archeological record is fairly minimal, so we have our knowledge of events passed down to us largely through art, in the form of Homer's epic poem. We have drama rather than reportage. We have developed characters rather than historical agents. And we have meter and rhyme.

Posted by Sulci Collective at 09:53