The first intimation they missed was when the sky suddenly darkened. Not the sky across the oceanic vista they were lovingly gazing out towards, but the sky immediately above their canopy as a shadow began to shroud their idyllic platform. They had hoped for a shooting star to mark their union, but they felt they could accept an eclipse, even if it proffered the imagery of the lights going out.

The second pointer they missed was their wedding photographer fleeing his assignment, leaving his camera to spill to the floor in his haste to skedaddle. To be fair, since he had been stationed  behind them taking a shot of them looking out to the ocean, it was perhaps not entirely unsurprising that they remained unaware of his deletion from the scene.

The third inkling ought to have been when the columns of their belvedere began to buckle and bend as the downward thrust on its roof increased. They imagined they might be about to be caught in the middle of a tropical cyclone, though all remained calm out at sea in front of them.

The fourth prompt was as the pressure increased, both developed nose bleeds. She was distraught as the blood stained her wedding dress, while he winced at the thought of the likely lost deposit on his tuxedo as the blood spurted on to it.

The conclusive affirmation was when the canopy was lifted off its pillars and a giant hand swept down and plucked them both up and popped them into a huge maw. The giant loved the taste of wedding rock cake. The first tier made from the stone, the second from the fondant wood and silk of the belvedere and the tasty final topper of bride and groom, though the chewy texture of the bride’s dress could sometimes get stuck between the giant’s teeth. But then he would employ one of the belvedere’s pillars as a toothpick. 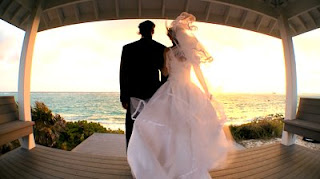 Posted by Sulci Collective at 19:58

Damn...those giants are getting to be a regular problem!
I thought you'd gone all romantic on me again when I saw the leader for this. Silly me! :-D
Great fun little story. Well, not so much fun for the bride and groom...lol!

don't blame me, this was the visual prompt I was handed! And you know me, happy photo prompts opposite type of response in me. I heard a label for this type of behaviour yesterday, but blow me down if I've only gone and forgotten it. Something like Oppositional Disorder ...

Lol! :-D That sounds quite serious. Are you in a support group?

how can somebody who is oppositionally defiant be in any kind of group? :-)

I love the idea of 'wedding rock cake'!