Is Viewing A Beheading Video A Crime?

While indisputably morally repugnant, viewing a beheading video is not a crime. Sharing it online however is a grey area. A crime has been committed, that of homicide. But who do you report it to? The act happened in Syria, so reporting it to your home police force isn't going to achieve much. The intelligence services of the West couldn't find Osama Bin Laden for 10 years and they're unlikely to track down "Jihadi John" unless a ground campaign kicks ISIS out of Syria. Sharing such videos, which after all are designed to inflame passions to the extent of recruiting more followers to the ISIS cause, could be deemed to be incitement to commit terrorist acts, which would constitute a crime. But no one took FB to court when they (albeit briefly) hosted beheading videos in the name of debate, until public outrage forced them to take them down.

There is a parallel here with sharing images from the London riots of 2011. Many people on the streets were not participating in the destruction, violence and looting. But they were stood there recording the action on their cameras and phones in order to share on social media and blogs. Again one could say they were committing the offence of not reporting a crime (or rather a lot of crimes), but who exactly would they have reported them to? The forces of law and order were completely stretched and overwhelmed by trying to deal with the riots. Phoning in an incident would not have prompted any police response. In that case, posting images to FB probably wouldn't be regarded as incitement and certainly not to terrorism. But the point remains, what is the responsibility of file sharing of contentious footage?

I've written fiction about a beheading video. But my exploration was about how these are designed to wreak an effect, what the symbolism is about and how it works. And of course existing solely in words, there isn't the instant visual force of a video, much as has centred around the argument this week over Hilary Mantel's short story about the assassination of Margaret Thatcher, which has seen senior political figures call for a police investigation into the legitimacy of the story as art, or whether it represents a crime. So I don't think I have to turn myself in to the cops just yet.

Clearly the boundaries need still to be defined. 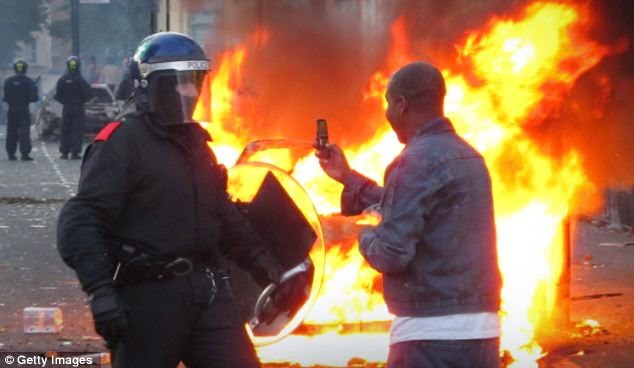 Posted by Sulci Collective at 11:57