Me And Bertie Brecht

I don't have too many literary heroes. And of those that I do, the likes of Kafka, Beckett, Winterson, DeLillo and Sam Shepard, my writing is about as far removed from these supreme stylists as is possible.

Yet one literary hero has absolutely informed my approach to fiction. The German playwright Bertolt Brecht Brecht's stagecraft was shaped by his political beliefs as a Marxist. While his end motives don't inform my work, I do share some of the approach he adopted.

Traditional theatre took place on stages behind a proscenium arch.

The rear of the stage plus its wings (and any scenery flats used in the play) were said to form three walls and the audience sat facing an invisible "fourth wall" through which they watched the action unfold on stage. Although the wall doesn't exist, or is said to be invisible because it marks a definite demarcation. The action beyond it is magically transformed, the believable world of the play into which the audience are transported as they watch; assisted by the transformations made by the actors as they enflesh and inhabit other human psyches than their own.

Brecht wanted to break down that fourth wall. He was intent that the audience were not transported into any other world, that they were fully aware what they were watching on stage was an illusion, an exercise in make-believe. Actors often addressed the audience directly and out of their character. He used music, song and comedy to underline the non-realistic nature of the action. He felt that if they knew what they were watching was not real, it would help them enter the expressive language and stagecraft of the play and that was where he could get them to engage with his political message. He wanted to analyse the relationships of power between different social groups that he felt otherwise would go hidden. 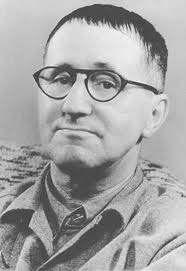 Okay, so you may be asking yourself, how does this tie in to novels? There aren't any actors to disabuse an audience of the notion that they are entering another character. But I'm interested in a similar process of alerting the reader to the fact that they are reading a work of fiction. That they don't have to suspend their belief to enter the world of my books. That as author and reader, we both enter a joint venture to try and establish just why this particular piece of fiction exists in the form and precise manner that it does. Why have I opted to tell this particular story in this manner and why the reader might read it. We are sharing a journey through the narrative that relies upon both of our input. This is not quite the journey of a reader being transported through a world by a narrator guiding them firmly by the hand. Although a reader uses his own imagination to enter the world of the book, once there he is often restricted in creating it. My books aim to have the reader participate in constructing the world of the book, because he has to decide at what level the fiction is pitched at.

Like Brecht's actors, my characters address the reader directly. A narrative voice is established that can flirt with the reader, argue, wheedle, beg, chastise and all sorts of other direct interactions. The voice with which the storyteller tells their tale, is more significant than the story they tell, since that yields greater insights into their character. How trustworthy, how reliable are they as a narrator? (hey aren't at all of course, for they are fictional creations!) How 'true' is the fiction they are weaving? The novel keeps asking the reader to consider that. The reader may have to realign the level at which the 'reality' is pitched within the novel at various stages and that in turn may make him question the level of the 'truths' about his own reality. A dynamic use of the illusory nature of fiction to probe the nature of illusion around us. The relationship is less that of reader and main character, but reader and author to yield what I hope is a richer reading experience.

So Bertolt Brecht I salute and honour you for your insights.

Posted by Sulci Collective at 00:20