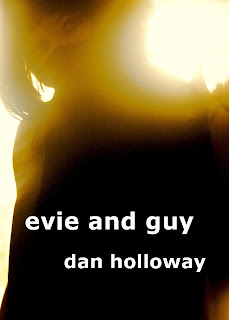 What a fantastic concept for a book! George Perec may have written a whole novel without a single letter 'E' (ironic seeing as there are four in his name on the spine, bet he still got paid royalties though), but Dan Holloway has created a work of literature constructed almost entirely from numbers.


Relationship, not in that wooly sense of you and your partner, but an actual physical relationship of two bodies (objects) in proximate space. Though the two narrative timetables are separated in the text, Evie’s following on only after the entirety of Guy’s, the reader is silently entreated to superimpose them to try and render meaning. To see where their onanistic acts might coincide (the only way perhaps for them to mutually consummate their love?) or perhaps where they are cast down in their own solitude and simultaneously scratch their own sexual itches. The beauty and simplicity of the 10 digits of the numerical palette are arranged and rearranged with subtle differences so as to offer different emotional tenors and different physical alignments.


I’m reminded of the fathers of forensics such as fingerprinting, who patiently built up a database until the sample was large enough to be able to pronounce it a science that followed rules and predictable observations. Here the reader, if they are so minded, can plot the blow by blow comparison of Evie’s times and dates with that of Guy’s to glean the emotional state of their relationship at any one moment. Was Guy frotting himself to death in a particular year because he was unfulfilled by Evie, or separated from her? Did the Fall of the Berlin Wall give him a hard on in front of the TV that he just had to relive himself? For her part, Evie’s self-pleasuring never falters while with Guy and it is only when he is dying that she becomes less surefooted (handed?). Once she has honoured his passing, she reasserts her sexuality and is able to fulfil her pleasures as before. Guy’s dishonour roll of interrupted or failed tommy tank manoeuvres attests maybe to the more mechanical torquing of the male member, that there is a climactic destination that has to be attained, else it is a failure. A dud. A blank. Even the name 'Guy' perhaps stands for every (male) man perhaps? This is a book about both relationship and gender, employing numbers but not by the numbers.


I don’t think its canvas is quite as large as the author perhaps imagines, citing the artistic language of Rothko and Emin in his preface. It’s actually way more intimate and I believe all the better for that, so that it is not weighed down by notions of grand art and experimentalism. But it is interesting, that just like an opaque piece of contemporary conceptual art may rely on its title and or an explanatory text, “Evie and Guy”  hinges on that one page explanatory preface and the sole appearance of words in the numerical narrative at the year 1995 to draw the novel to its conclusion.  I read the book first without the preface and couldn’t for the life of me figure out what the set of figures in the brackets represented. It was only by reading the explanatory words of the preface that those important contextualising devices were set in place.

A brave work, but in form and content. And one that could reward endless revisiting with full attention to detail. Plot your own matrices and enjoy!
The book is free to download from http://danholloway.wordpress.com/work-in-progress/evie-and-guy-2/ or available as a paperback from http://www.lulu.com/shop/dan-holloway/evie-and-guy/paperback/product-20961947.html for £6.99 + p&P or direct from Dan for £7 inc postage by paypalling songsfromtheothersideofthewall@googlemail.com

Posted by Sulci Collective at 20:24