Social media has been full of the exchanges of fire in Gaza. I fully understand eye witness reports, ensuring that the view of people coming under attack is disseminated around the world, where it otherwise might not be reported due to certain media bias. But there is also the official spokepersons' views to counteract the view from the ground. A war of hearts and minds to sway the Western (in the main) World. But most of the Western audience is already fully aligned on one side or the other, such is the long-standing nature of this particular conflict.

Reading some of the responses online, some people seem to be reacting to this as if this has never happened before. Fair enough if you're under the age of 18 perhaps, since Israel sent in its army only 4 years ago in the previous of its attempts to suppress Palestinian militancy . This is a chronic, repetitive state of affairs. Israel talks about ensuring its security, but the best way to do that would be to support and nurture its neighbour rather than cripple its economy and drive its people into poverty. Like it or not, economic wellbeing draws the sting from much protest, even those based on claims of territoriality and identity, in that a tranche of potential opposition is unwilling to rock the boat if they are flourishing economically. When the Palestinians were engaged in a campaign of suicide bombing through the late 1990s and into the early 2000s, the Israelis had to deal with the physical clear up. Since Jewish law demands that dead bodies are preserved integral for burial, every piece of flesh and even the spilled blood was mopped up and buried. A single life is so precious in Jewish teaching, witness the campaign to get the release of one Israeli soldier held captive for 5 years, in return for 1000 Palestinian hostages. Yet they don't extend the same thought to the lives of the civilians killed in air attacks on cities. In fact that seems to represent the exchange rate calculations of the Israelis, for every one of their citizens killed by a Hamas rocket, 1000 palestinians may have to pay the price. The calculus of revenge, deterrent, escalation, call it what you want.

But far worse than not supporting Palestine and its economy, over the years Israel has indulged in a string of abuses heaped on its neighbour, which both fuels Palestinian dissent and just as significantly, has seen a dereliction of duty on the part of the Western world in not sustaining a constant media campaign over. Why do we only wait until hostilities break out, when the mismatch of military might, the disproportionate response by the Israeli Defence Force and densely populated cities are attacked from the air, before raising our voices in protest? Below is a list of continual Israeli abuses of Palenstinian rights and property, which they have been allowed to get away with relatively unscathed by the world's population. Often UN resolutions against Israeli actions or interests have simply been flagrantly ignored by the Israelis, because they can. So when these hostilities are over, let's keep the pressure up on the following.


1) The Israeli state has a right of "Aliyah" enshrined in its constitution. This is the right for any Diasporic Jew who wishes to resettle in Israel, to be granted property by the state, to facilitate his return home. As an echo of the short-lived "40 Acres and a Mule" programme to freed slaves during the US Civil War, it sounds utterly noble. However, look at a map of the region. Israel is tiny. It has no more land. Except what it snaffles away from the Palestinians. The infamous "settlements", inevitably bordering on Palestinian communities, having in all likelihood taken away some of their land. Nothing inflammatory there then. Aliyah is an open ended contract that allows the Israeli state to land grab whenever it fancies it can get away with it. Which given the deafening silence on the issue, is at present, all the time.

2) The Middle East is always associated as being the place where oil is the significant commodity. But not in Israel, where it's water. Much land has been reclaimed from the desert, which Israel has wielded sufficient technological skill to make bloom and contribute to economic production. But it also serves to place a premium on water resources, for water must be channeled to the desert where Nature has seen to it that it is in scant supply. Israel has diverted water courses, tapped into underground wells, removed trees which has altered environmental ecosystems such as groundwater and salt levels. This process has being going on for years, with little protest from the West, despite statistics showing the Palestinians' water supplies is below the World Health organisation's stated daily minimum requirement for good health.

3) A security wall separates Israel from the West Bank Palestinian settlements. It was erected in response to Palestinian suicide bombers gaining access to Israel for its targets. Israelis point to the wall's success in virtually eliminating suicide bomb attacks, but at what moral cost? The wall is a form of Apartheid as practised by the whites in South Africa. Since the division between Israeli and Palestinian is along racial lines. Since many Palestinians work in Israel, the wall is a solidification of how the Israelis exploit this fact to make Palestinians all too conscious of their second class citizen's status. Israeli workers don't get searched at checkpoints as a matter of course on their way to work.

And where the wall demanded to be sited on land already occupied or owned, guess which of the two  communities had their property sequestered to the wall building programme?

Sidenote: when suicide bombers were getting through to Israel before the wall went up, Israel would punish the family of the bomber by bulldozing the family house. Even on the level of waging a strategic campaign, this doesn't make any sense. All it can do is reinforce the community's sense of outrage, engender sympathy for the family and foster recruitment of more suicide bombers. This came at a time when world opinion was far more divided on the Palestinian cause through this very issue of suicide bombing as a tactic and further thrown into disrepute when it emerged that the ever-shrinking pool of recruits was being bolstered from the ranks of the young and the vulnerable. The wall helped usher some of the sympathy back to the Palestinian corner.

4) Israel has repeatedly practised state-sponsored assassination of Iranian nuclear scientists, as well as Palestinian targets both in Palestine and other neighbouring countries. Yet no one calls them on this.


So please Twitterati and Facebook Fans, don't confine your chat and outrage only as long as the rockets fly back and forth over the border. This is an ongoing situation that needs our agitation and pressure to resolve a long list of injustices and exploitation.


***Make no mistake, this is a conflict over land. A geopolitical struggle with appeal to the Old Testament, mysticism, blood history and the rest. What this actually means in practise is a battle for living space. The war over water, the land under the defence wall, even the nature of fighting within the confines of Palestinian towns, may I recommend you to a tremendous book that deals with the spatial conflict involved throughout. 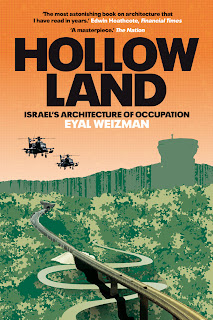 Posted by Sulci Collective at 22:54