In an interview with a French magazine, Philip Roth dropped the bombshell that as he feels he has no more books in him, he is to cease being a novelist. "Nemesis" is his final published work.

First let me say I think across Roth's huge catalogue of books, there are some masterpieces such as "American Pastoral" which I think can truly be held up as the American post-war epic novel; but there are also some rather tiresome books where to my mind he demonstrates an obsession with the Jewish male and sexual anxiety, like Woody Allen but without the gags. I also felt that Roth's more recent works since "The Plot Against America" (which showed the breadth of his skill as he turned to a new genre for him of Speculative History), have been a bit thin, both in actual volume and in content of those meagre pages. "Everyman" is a brilliant concept, where a man in the twilight of his life plots his own physical decay across his own life. But he doesn't quite execute it for me.

On the one hand it could be said that Roth having been such a master of letters, now took considerably fewer words to say what he wanted to say in a novel. On the other hand, maybe these last few books were evidence of him simply running out of words. I admire him for concluding that he's done. I always imagine that they will have to prise the pen from my dead hand (though of course it's keyboards now and goodness knows what technology in the future), but maybe I will have long run out of words before that time and if that's the case, I hope I have the honesty to quit rather than churn out contract obligations. 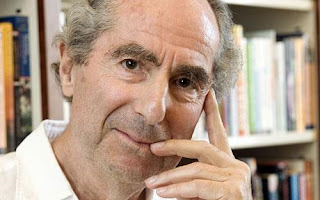 Posted by Sulci Collective at 20:18

Email ThisBlogThis!Share to TwitterShare to FacebookShare to Pinterest
Labels: American Pastoral, No More Words, Philip Roth, Retiring From Writing, The Plot Against America

I've never been a Roth fan, but like you, I can't imagine never writing again. I suppose that's the thing, though; he'll probably still write, just not novels for public consumption.

I think that's what I do now anyway, even though my novels are out there in public!

He has a massive body of work. Some of them were rewriting previous books, but others were genuinely new horizons for him. He has nothing left to prove to anyone, his reputation is secure. So I believe him when he says he has no more books in him.

I also read somewhere that he wanted to stop reading books as well! That sounds like a crisis to me ... so sad.

Really, I wasn't aware of that. That is sad. He mat well be out of words to write himself, but you can never run out of books to read I would have thought? Thanks for the heads up.