The Unfathomable Nature Of Creativity

I hadn't gone there with the intention of emerging with a story of my own. I'd gone to support and hear a friend of mine's poetry. Poetry is like cinema for me, an artistic medium a milllion miles removed from the prose fiction I write, so I can actually enjoy it on its own merits, unlike reading a novel which I always have half a professional eye when reading.

I sat through the first couple of poets and then my friend came on and immediately sucked me into her words and delivery, transporting me away from my surroundings in the small venue. But then she uttered the word 'fuselage' and my creating brain kicked me back into the moment. 'Fuselage' is rather a fine word in that there is no ambiguity to it. It can only conjure up the notion of an aircraft. Unlike other words which have several shades of different meanings. And yet it's also a slightly unusual word that doesn't tend to crop up everyday. Its poetic qualities had been deliciously employed by my poet friend. To dsiasterous effect on me as it turned out.

Since the word had set off a cascade of associations and images in my head that took me out of her recital. The notion of aircraft resonated in my head with 9/11, a perhaps non-too surprising association. Yet in my mind, it had already become mutated to a toy airplane built out of Lego. Don't ask me how or why. It wasn't an image I'd been playing with prior to this. The human mind makes links and affinities so rapidly, there is simply no keeping up with, or grasping of it.

The word 'fuselage' resonated in my head as a plane without wings. Wings that had been stripped off. Somehow the alchemical processes of the mind mutated this into a Lego plane. Not one of those intricate Lego designs either. Merely an 8 block piece with another perpendicular 8 block serving as wings. It wasn't even clear to me if there was a tail on this most primitive of forms. No cockpit, pilot or wheels. But it manifested as an image of a Lego plane crashed into a Lego tower building.

There was my central image and immediately the lines started flowing to flesh it out. Again I had no notion of this theme, of Lego play, crashed airplanes or anything buzzing around my head in the lead up to this. I played some of the lines over in my head to reinforce them and make sure they 'set' in my memory like wet concrete. Then I sat through the last poet before the interval struggling to even listen to his words above the clamour of the sentences taking shape in my own head and proceeded to go off for some noodles and small talk with my poet friend.

I managed to not get distracted by the seething crucible of words and ideas for the duration of the meal, but once we'd parted and I was back on the London Underground, I proceeded to take out my Moleskine notebook and write the whole story straight through, or at least 90% of it anyway.

In the interim, my creative processing mind had moved the plot on to the notion of a little boy building a Lego tower and experimenting and learning about the fundamentals of construction as this was his first concerted effort to master the task and his tools. That conflated into him also being an architect, that god-like creative power young children have when they are at play and weilding their imaginations to transform their toys into whatever they make of them. The conception of raising a tower gave the peice its form and rhythm. This wasn't to be in paragraph form, but line strata upon strata, rising and accumulating. The notion of a tower and a pre-lingual child also allowed me to insert a little bit about Babel and language. Then that slotted into the destructiveness of little boys as he crashes and razes his own towering creation and provided me with the conclusion and the final line bringing it back to the Twin Towers as something he possibly saw on TV and was re-enacting here.

All of that sprung from god knows where on the back of a single word uttered in the midst of a poetry recital. If I hadn't have been paying rapt attention and somehow missed that word, would the story have ever emerged and existed? I have no idea, maybe something else might have prompted it, but I doubt it. I am none the wiser that even with the catalyst of the word, where all the things about a child buildinbg a toy tower and crashing a plane into it emerged from. It wasn't something I was ever consciously thinking about and yet it must have been there somewhere in my mind, even as a set of disparate thoughts that this one word 'fuselage' was able to knit together into a coherent image.

I remain completely baffled but unutterably thankful that this is how creativity often seems to work.
You can read the finished product below. It made its way into my first collection of flash fiction pieces as the final one of 52 flash stories that I wrote. And was possibly the quickest of them all to pen.


The boy is playing with his Lego bricks.


Thinner than the plastic parallelograms he manipulates


He mounts one atop another


Searching for the hidden holes beneath till they snap home


Mortise and tenon, interlocking and binding


The colours are charmingly brightly random


All perched on a thin flat base


Manufactured green to suggest the verdant


When where he lives is submersed in grey concrete.


Modestly ascending for the heavens in small steps


The master builder with no picture in his head.


But cannot yet assemble sentences into the air


He likes the word 'sky', unknowingly fumbling towards its suffix


As he scrapes the plastic bucket of seemingly limitless bricks


Across the floor towards closer reach


The intelligent designer just happened on some more axioms of geometry


The reach of his arm, the length of a cubit


The boxer's tale of the tape.


One block in width only


A coloured DNA map of his unformed, boundless mind


A Tower of Babel beyond the forfeit of language.


He has an innate discomfort of unaesthetic asymmetry


He cannot abide the overhang


His jaw set firm as he repairs the lip hanging over the void...


Elevating higher, yet higher towards the unfocused notion of heaven


He is amused that it sways


A basic fundamental about foundational and spreading the load


Yet the plastic edifice holds its stability


He stays his creative hand


Perhaps his pinched fingers ache from the sustained production


He pads backwards on his posterior


To view his erection with perspective


Is he proud? Is he awe-struck?


We cannot yet be certain of his fledgeling emotional range.


He crosses one over the other and locks them in perpendicularly


His building soars, but now he can fly


He rams the plane into his tower


The high rise collapses beneath the assault


The plane breaks apart at its fulcrum


A lesson in physics, but one beyond his tender ken


He sifts among the rubble


Apparently delighted with something about the outcome


He sets about rebuilding the structure


Assimilating what he has learned about breadth


This time he deliberately courts overhang as he fashions gaps


For he has plumped for glassless windows


Holes he has recalled from watching the Jenga unfold


Though his are sightless, giving on only to the interior of his tower


But all in all, this construction is smoother, more practiced


The tower is hoisted up in double quick time


He recasts the plane


Declines to put a tail on it, maybe because he has never been on one


Pincered between his fingers, he flies it in the airspace above the column


He increases the imaginary throttle


And drives it hard into the heart of the tower.


The wing-piece is stripped off, but the fuselage stays lodged


In the finally calibrated inbuilt window


The tower wobbles, but stays standing


Yet the slow fuse of combustion has been lit within him


He skips out the room for some refreshment to slake his thirst.


What have we learned here today in the living room?


Some geometry, some physics, a love of destruction and aesthetic ambiguity


Thus is the groundplan of hell laid down in his mind 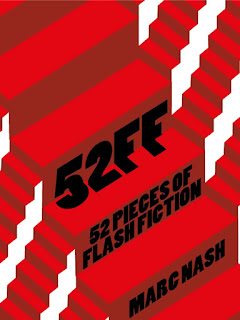 Posted by Sulci Collective at 14:47

Wow, Marc! The creative process is in fathomable as you say. It's magic and it's alchemy. I loved reading about your journey of inspiration from trigger to the final piece. The piece itself is superb. It reminded me a bit of the Lego therapy I do with some of my autistic pupils- some of the, children with no verbal language or limited social language. Quite moving actually.

Thank you very much Anne. I still, a year later, have no idea why the notion of Lego should pop into my head.