Heaven had become a hive of hellish hother and pother. Everywhere the eye could range, angels with gossamer wings were scurrying hither and thither, humping armfuls of plaster of paris. Save for those angels who had toppled over and lay prostrate, unable to right themselves. The increasingly feeble splay of their wings heralding the slow extinguishing of their light, like the dying embers of a fire. These angels had revoked their immortality.

Some had curled their wings around in front of them to form a scoop with which to carry a greater volume of the plaster. If they failed to reach their destination before the gypsum hardened, the seraphim were cast solid and pitched headlong to the ground. Yet in fact any contact with the terrestrial substance unwittingly formed a granular seal on their own death warrant. Any besmirching of their diaphanous plumes with the duller clots of the plaster, would eventually set hard, thereby plucking their wings of flight and exposing them to the afflictions of gravity.

Yet still they persisted in their lethal toil. Some celestials simply poured the plaster over themselves and transformed instantly into statues. In suicide thus they became the objects of their collective endeavour. Since the angels were striving to build a terracotta army in their own likeness. Stretching back as far as the horizon and beyond. The host were trying to suggest a swelling of their own ranks to the near infinite. To confront another, oncoming swarm. Finite, but pullulatingly deadly. For mankind was on the move and seeking new pastures. After eviscerating their own terrestrial realm.

Puttos were exhorting their aerial elders to evermore effort. Tooting their long-stemmed trumpets. The very same notes that used to usher in sweet harmonies, now resounded as with the blare of a cataclysmic tocsin. Nude Cupids were firing their forlorn love arrows over the heads of their venerable peers to spur them on yonder. Yet the further down the plaster parade, the more ragged and less-angel like the sculptures appeared. In fact they looked nothing remotely more than a pillar or a termite mound. The remaining angels still feverishly trying to erect statues at this point, complained to their goading juveniles that their delicate hands were only meant for strumming harp strings. Not shaping lime that burned their skin.

Just as the Cherubs were about to remonstrate further with their patriarchs, the latter interposed by what means the humans had finally managed to locate their own ethereal plane. That sublimity which had previously provided them with their inviolability from the grossly material. How man had returned to consider their own ancient maps of earth. Festooned with Cherubs blowing trumpets propelling propitious marine winds and Puttos unfurling scrolled cartographies. Man simply gazed up from the terrestrial landmasses following the orientation of the cherubs and hence were now massed outside the empyreal gates. The Puttos and Cherubs protested that such maps also bore fearsome dragons and Gogs and Magogs. They inquired of their wise ones why the humans had not followed their abyssal trails, why they had only alighted on the celestial? The angels explained that when the humans looked at such monsters, they only saw reflections of themselves.

Irresistibly, mankind's first port of call had been Hell. It being of a more natural fit temperamentally. Imagine their self-righteous shock at being informed by Lucifer that Hell had been the original version of their own earth. Its current searing temperatures and icy inertia were what their earlier incarnations had reduced the planet to. Lucifer and his skeletal crew had been charged with maintaining the fissile core and preventing it from mimicking a supernova. Those scientists who happened to be in the van of the human hordes had been disbelieving, declaiming that no race could ever have the capacities for survival within the fearsome temperatures of a star. Mammon retorted that prototype earth was ever a planet and not a star, only how in their forebears ravenous surge, its magma had been fired up and the molten core irradiated through mankind's meddling and destabilising of the whole fabric. There had flashed  the most fleeting flicker of recognition in the faces of the scientists, for after all, similar processes had overtaken their own earth and compelled their verdict of a species-wide emigration. Their smugness swiftly wiped from their countenances, as the press of the multitude from behind impelled them into fiery pits and the abyssal chasm itself. Mankind had delivered its verdict with a casual shrug of barging shoulders and seethed onwards. They were after a superior berth than this home once spurned already. Lucifer had signalled ahead to his angelic brethren.

The Cherubs and Puttos were distraught that their own joyous annunciation and blazoning of human progress had betrayed their own kindred. And yet the humans couldn't have been as terrible as their elders lead them to believe could they? After all, consider the grotesque impressions of their own form rendered here by the angels and compare that with the bewitching pulchritude of the human depictions. No, with such art in their souls, the humans simply wouldn't pull their wings off them as they might do to lowly flies. If anyone was presenting a certain ugliness of the poetic soul, it was the angels themselves with these abominable likenesses. The callow angels turned to welcome their spiritual masters who had proven they could work miracles with base matter... 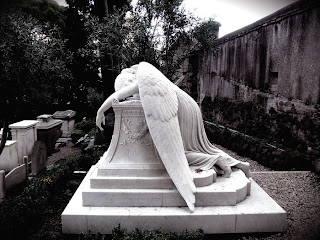 Posted by Sulci Collective at 19:57

Oh I do love the way you subvert the universe...Those poor cherubs don't know what's coming

Indeed I love the picture you have created here, unsettle the world as we know it eh. Loved this line:
"The angels explained that when the humans looked at such monsters, they only saw reflections of themselves."

I love your explanation of Hell - it makes Lucifer look less like a demon and more like someone just trying to do a job.

I love how you take the ephemera of the past (maps) and use it as a fantastical means of passage etherwhere - a new manifest destiny with as much likelihood of success. Is there anything humans won't try to conquer? I love the anxious dread of these poor creatures.

Funny enough, I got a visual from the film version of What Dreams May Come - linked back to the Seventh Seal (both with sardonic image of Max Von Sydow) and now to this. Illumination on the edge of ruin. It's rich, fantastical - would be something to see, represented in a graphic novel.

Brilliant collision of ideas - angels aspiring to terracotta warriors and working like ants. Loved this.

Thanks chaps and chapesses. I reread this and gained new connections within it myself!

What a cracking first line! Not that it stands alone, of course.
Loving the imagery of the angels turning into statues
And what a genius way of locating Heaven!

Oh, those poor angels! But I couldn't help but laugh at the image of them pouring the plaster of paris over themselves - hilarious.
This might be your most original yet Marc. Love it!

Some great lines in here, Marc, and I like how you mesh a traditional religious worldview with a modern scientific one without any real incongruity. I'm left pondering, though, where is God in all of this? Don't know if that was your intent or not, but this brief tale could spark some seriously intense theological discussion.

The sentence structure struck me as fragmentary, which was a bit jarring at first but gave it a distinct rhythmic style once I got into it. I really enjoyed it, and if you ever put together another #FF collection, this one should definitely be in it.

funny you should mention God Travis, he was in the draft idea version, but got guillotined by the word limit. I did have him as an absentee landlord, scouting out the next celestial paradise, but in the end he remained on the cutting room floor and I saved on his appearance money :-)

Love the description of Hell as some place the humans already effed over. Reminds me of the bumper sticker, "Earth First, we'll screw up the other planets later."

I'm with tokidokizenzen on the fragmentary sentences. It did well illustrate the mood of the angels as they built their defenses though!

Superb throughout.. and a great opening line. which sets the scene for a fabulous metaphysical farce. One of your best!!

A brilliant piece of writing Marc, I do feel rather sorry for those heavenly creatures knowing that us lot are on our way to ruin their bit of real estate.

I liked the pace of the story. It gave me time to adjust to the visions you beautifuly deliver and the actions of the angels. I also enjoyed this idea of Hell.