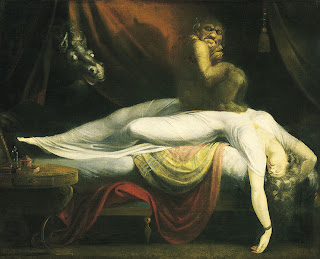 For added emphasis, the succubus shrugged her shoulders, reflexively curving her wings to shroud her breasts, though not the pearl of her sex.

"You're losing your touch".

"Well aren't we all in this epoch of the Worldwide Web? Brothers and sisters are doing it for themselves. But not to each other".

"Do you think he might have been one for me?"

"I dunno. It was all so much easier in the old days. When the Church told everyone what their orientation was. Or the Imams for that matter, Eastwards".

The incubus distended his wings with considerably less delicacy than had the succubus, not the least part of which was because his genitalia were thrust forward by the action. He cracked his knuckles and exhaled theatrically as he did so. He stretched his lips into a raven leer.

"Was he on his back or his stomach when you left him?"

"Oh god, not another one with a baby fetish? Grow up already!" And with that the incubus brought his taloned hand up to his mouth and blew against it, before quickly moving the hand to waft his breath back under his nose.

The incubus trudged back, wings between his legs.

He shook his head slowly in response.

"Not a bleeding sausage no".

"My Liebchen, it isn't always about sex. There are other nocturnal emissions to be harvested and other means to bring them about".

The two beings hung their heads, veiling them behind a leathered wing-tip.

"I shall take on this most trying of cases. You both now go seek out others we have marked for reaping".

The man was no longer foetal at least. Made for a smoother saddling. Before he mounted him, the first thing the Nightmare did was peel back the man's pyjama bottoms. There was nothing at the crotch other than the many ridged layers of a cicatrix of skin. He shook his head. His two imbecilic minions could have saved themselves a whole deal of effort if they had only checked for a root cause of the man's unresponsiveness. Although it was true that since the outlawing of castrati, it had somewhat slipped from their diagnostic checklist. Been a while since he'd seen one, but they had always healed very clean, in spite of primitive surgical instruments in the early days. This one looked more rather more mangled. Maybe it had happened when the skin wasn't so youthful and resilient.

He looked at the man's eyes for clues to any affliction. But he only saw his glassy, empty stare.

"At last we get to meet in the flesh".

"What? That is not possible. No one sees me in the flesh, because I only appear in people's dreams when they are asleep".

"Old trick we were taught, sleeping with our eyes open. Ever alert, we can still see shadows and changes in the light in case we have to snap into action".

The man jerked upright and the Nightmare flinched away. The human smiled with a rictus more grotesquely menacing than that of his own incisored incubus minion. The Nightmare regathered himself and tentatively inched closer to the bed. The man watched him but didn't react in any other manner. The Mare grabbed hold of the man's legs before springing up to sit on them, his tail dragging behind him still hanging over the edge of the bed. Using the man's legs like a pole, the Mare fed himself up to the man's waist, whereupon he opened his own horny legs and straddled the other. He bent his knees in to clamp his lower legs against the man's pelvis, the barbed skin looking to drive their spurs into the man's flesh as a goad.

The man didn't move a muscle. The Mare brought his barbed tail up and whipped it across the man's leg. Again the man remained motionless.

"What are you, paralysed or something?"

The man flexed his leg with a sudden jolt. The Mare toppled to one side, but with his demonic strength, managed to remain squatting across the other's legs.

"Not paralysed no. But numb. I can't feel sensations below the waist".

The Nightmare started jouncing his posterior as he tried to ride the man in the manner he was accustomed to doing on all humans. His gluteus maximus tried to manipulate the man's legs, but they stayed resolutely leaden beneath him.

"Yes well the reason for some of that is obvious. But the legs? This goes beyond tempered muscle control, even for Buddhists".

"Yes well your power lies purely within the dreamworld. When I am not dreaming. In the physical world you are absolutely puny to me".

The Mare picked up the fork of his tail and thrust it into the man's leg. The man tilted his head and offered a quizzical raised eyebrow.

"I think the misapprehension you are labouring under, is that you are here to terrorise me".

That stopped the demon in his tracks, his hand frozen in place on his own tail.

"All the terrible images and visions you credit you can thrust upon me, even if I were asleep, I have not only seen before with my own eyes, I too have inflicted them upon others. In this real physical world. So they could not possibly pose me any disturbance. The reason I am forever sleepless at night, has nothing to do with what you or anyone can throw at me. It comes from inside my own head. Replaying on an endless loop. Satisfyingly. Deliciously".

"Oh I get it! I've met your kind before, I've dealt with the likes of you at their zenith during the Counter-Reformation".

"Those amateurs? They were bound by their puny imaginations and an unswerving obedience to their gods. I am a bringer of true terror. I have no such allegiances. Not even to myself".

"You? You're all mouth and no trousers!"

"I did not want to merely triumph over those two infants you sent to taunt me. I wanted the master himself, that is you. A real trial of strength, though I find you in actuality somewhat of a disappointment".

"Now wait. You have to show me some respect. For the weight of history and tradition I bear". For all his bravado, the Mare had plopped off from the man's legs and was backing away from the bed.

"You know what I'm, going to do? I'm going to get hold of that boy and girl of yours, what are they, brother and sister, young lovers? Not anything I haven't incorporated  hundreds of times before. Not even the ugliest pair either. Anyway, I'll gradually dismember them, keeping them alive of course, so that I can feed bits of each to the other. Starting from the feet. After all, that's sort of how I was initiated into these dark arts. How I was tempered... That's got you choking now hasn't it? You're so weak. Your time in the job is up. You have been put out to grass by the likes of me in over half the countries of the world. Sweet dreams Nightmare".

Posted by Sulci Collective at 22:34

That'll teach him to mess with a Eunuch and a very dark one at that.

I was riveted to the page reading this Marc.

Delicious turning of the terror onto the master. Cunningly clever.
Adam B @revhappiness

The human mind can learn to conquer any dark forces. Unfortunately, in learning to do so, it often becomes an even darker force!

Nice job with this one!

I don't think I've ever read anything quite like this before, and thoroughly enjoyed the read.

As the chief bad guy found out, no matter how bad you think you are... There's always someone badder.

Punishment from the emasculated - robbed of our ability to create, to live, to feel, what do we become? Like that which made us, historically speaking, I suppose.

The dark fairy tale has nothing on this. The mirror held up to the monster. Spell-binding stuff.

Excellent bit of horror! I enjoyed this very much.

This was quite the ride Marc! Very horrific indeed and brilliantly written. It just grabs you from the beginning. It kind of felt to me as if I was reading Neil Gaiman, perhaps some unwriten part of The Sandman, where the twist reveals that Horror itself has now something to fear from!

Lovely job! A standard Friday night in your house?

Jack - it depends on whether Have I Got News For You and or Dexter are showing on friday night TV ;-)

That Fuseli painting has always both terrified and repulsed me. Excellent hanging of narrative onto its frame.

I liked how what it all boiled down to was overconfidence -- in all four characters. Makes me wonder what's going to show up to scare the man... because I'm sure it's out there...

Love this Marc! It's deliciously horrific and quite revealing at once. Super work!