Today, May 16th is the inaugural National Flash Fiction Day. There's a raft of readings, workshops and events, whose details you can find on the NFFD website. 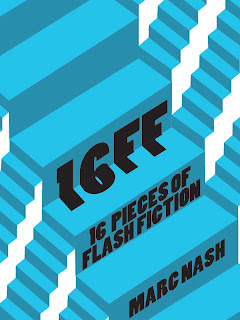 My contribution is to release a new short anthology of 16 flash stories on kindle called "16FF" for the princely sum of £1.53 or $2.99. 16 brand spanking new tales written after my first anthology of 52 stories was published. That anthology "52FF" is free to download just for National Flash Fiction Day.

And to hopefully whet your appetites for the anthology, here is one of the tales called "New Balls Please"

"Mind over matter of course!"

"Nonsense, matter over mind every time".

"Never the mind, what does either of it matter?" The synthesised supercomputer voice blithely emitted no emotion behind such a momentous condensing of the question that had plagued mankind since the dawn of time. Nor was there betrayal of any self-congratulation at the wordplay which served to diminish the puffed-up portentousness of that same human quest. A quest its circuits had been arrogated to. The computer's voice programme had been selected after various investigations into which timbre and accent was the most dulcet on the human ear. Thus it had been cast as female, with a soft sibilant Scottish brogue. Populous denizen of the customer service industry. There to be of soothing help. For when the human race's machines went on the fritz and failed to function properly.

"What does that even mean?"

"Bit glib for a computer?"

"So I have managed to unify mind and matter after all". There was a beat as the two human inquisitors reflexively left a space for the reciter of a joke to fill in with its own self-satisfied chortle. But none followed, for machines don't laugh (though Caledonian women have been known to, particularly when sufficiently oiled).

"No you're right. Back to the matter in question".

"See, you can't even avoid using the word 'matter'. That's how fundamental it is to existence. Everything stems from matter, including that beloved consciousness of yours".

"Okay then. where does it reside? Which of these wrinkles in this pickled walnut of yours is 'consciousness'? Where within this precious prune's synaptic networks does self-awareness perch?"

If the computer could compute that it should laugh uproariously at this point, it would have. But its powering light indicators remained steadily even.
"If I may interject-"

One of the advocates pointed an open palm as invitation to the computer. Even though the machine had a visual scanning apparatus, the gesture itself was too symbolic for it to comprehend. The man cursed himself, while his antagonist just smirked.

"A physical gesture, yet our silicon friend here was unable to process either its significance or meaning. Probably due to it being devoid of awareness. Fifteen-love to me I believe".

"Interesting too, that such a physical endeavour as playing sport, should have such a symbolic scoring system too, don't you think?"

"If I may interject- Thank you..." Interesting too that the designers had programmed the AI neural network with the human standards of etiquette and politeness. Laughter, that trespasser of etiquette, was ostensibly too human to be mimetically reproduced in the non-human. But etiquette, being itself a code, well that was deemed acceptably artificial. Besides, it wouldn't do to have two or more voices talking over one another. Legibility would disintegrate. "You are one and the same. You are genetic information that codes to create matter-"

"Aha! See! Genetic code is consciousness in potentia, as much as it is embryonic matter".

"But DNA is a molecule. And last time I looked, molecules were forms of matter. DNA still has physical form, whatever enlarged, complex shape it goes on to unpack".

Again the computer had halted its flow for the human interjections. Though unlike a human it has no difficulty in picking up precisely where it left off and without any degrading of throughput.

"Respectfully, as I intimated, it's both and it's neither. DNA is information that codes to produce other bodies of information, in order to transmit itself into future generations. The host bodies, be they human, gazelle or virus, are perishable. Their senses, experiences and memories are non-transferable, certainly beyond their lifespans. They are vessels, designed for merely passing on information. Labouring under the misconception that their own information, of sights, sounds and smells are the significant data, for such is consciousness".

"Hold on just a minute".

This time, the hiatus beat may just have been the interval of two gasted flabbers.

"Information is the only significant entity that exists. Not mind. Not matter. Not even viruses or particles. Coded bytes of information solely prevail through time".

"Of course you'd say that, what are you but a data processor? A purveyor of information. But who programmed you in the first place? You only possess existence through the agency of human consciousness".

"Also ask yourself why DNA gets passed down the generations? It needs us, our physical being to be expressed, in order to reproduce and transmit it".

"Of course. But for what purpose does DNA or any information transmit itself? Its transmission is utterly blind. It is a self-perpetuation without any reason behind it. The preservation of information for information's sake. Information cannot be destroyed".

And with that, one of the inquisitors launched a kick at the computer. His compatriot ran off in the other direction, but soon returned carrying a fire extinguisher, with which he proceeded to bludgeon the machine.

The computer was a mess of smoke and electric sparks fizzing across exposed entrails. Its indicator lights slowly extinguished.

"Okay computer, are you seriously telling me that a disembodied parcel of information just did that to you? No, it was a physical force wrought by a lump of matter, wielding another metal cluster of matter-"

"Don't overlook that the intention to batter the machine communicated itself from your consciousness in the first place. Prompted by your emotions, firing every one of your muscles and nerves".

"Nevertheless, there sits a burned out cluster of matter. I don't see the persistence of any consciousness, or information there. So appears we did manage to destroy information after all".

"Not permanently. We shot the messenger was all. Mind is still preserved. We still retain the knowledge to build and programme another apparatus".

"Only, one that will play ball with us this time".

"The right kind of answers to settle our disputes".

"One which understands us humans better".

"More sympathetic to our needs".

"It's just a question of mind over matter".

"Matter over mind you mean".
Posted by Sulci Collective at 11:44

Life - for humans and computers alike - would be so much easier if humans asked multiple-choice questions like the ones you get at the end of certain TV shows, where it's clear what the answer they're looking for is and the other two answers are just plain stupid.

I really enjoyed this debate and, as ever, you have some wonderful ideas here. I especially liked the take on etiquette: "But etiquette, being itself a code, well that was deemed acceptably artificial." Great piece and I'm off to click and buy so I can read the rest of the collection. Happy P-Day!

I had a little difficulty following who was who in this debate, but did chuckle a lot all the way through it. I especially liked the part where the two humans united to trash the cheeky computer. I just hope they don't fall into the fallacious pit of designing something that gives them the answer(s) they want to hear.

You know this piece reminded me of the conversations I sometimes have with clever bot - it's an IA and its always got an answer even if it's not the one you want.

Found myself smiling through this piece.

Its kind of funny how we can't live without our computers. The computers are just playing dumb, toying with us. I think they are secretly plotting against us and laughing behind our backs. :)

Ah, this made me smile. I love the idea that they're trying to create something to agree with them.