The dusty mote of memory. Bombinating around the waning waxy taper. Icarian fusion with the flame, fizz, fizz phufft. Shot down in conflagration as one dimly gropes for recall. Recurring memory of occurrings not ready for recollection at collection point 'C'.

Memory is thinned. Emulsion paint-stripped. Colloidal suspension of a happening in bite-sized gobbets. Mucilaginous globules, preserved surface tension until they go pop at being summoned to retrospection. It would never pass a retroinspection as to the detail. Everything is abbreviated.

For memory foreshortens. Foregrounded synaptic associations. Memory is not laminated ply. Is not the random accessed memory of hardware. It is non-locatable and barely locutable.

Memory is prompted by cues. A word, a smell, the clothes one was wearing. The refrain of a song, an emotion. It is the cues which are pickled and preserved. It has the feel of a stage production, wheeled out night after night after matinee after night. And then the set is struck as the theatre goes dark until the next production.

The first night adrenalin carrying the original performance through, the second night flatness, the grooved, mindless repetition for the length of the run. The happening was that first night, the reminiscence that of the ill-differentiated versions thereafter. Memory as the encore's empty bow.

Recalling the settings for the memory, how they have all the solidity of stage flats. Words replayed nightly according to the script, now largely forgotten, though the actor might remember a snatch, or a summoned-up feeling. If one tries to recall now, there will be improvisation, extemporisation, embellishment of the tale, because the dialogue cannot be reproduced whole. All is monologued, he said, she said.

The greasepaint no longer adorns, heightened, hyperbolic under the spotlights as the live happening itself would be picked out as memorable. Yet the actual fascia of memory equates to when the theatre is dark, barring all but the exit and safety lights. When the actor has removed the greasepaint, his features pale and bleached out by the glare. There might be an oleaginous greasepaint stain on the cuff or collar of his real world clothes when changing in a rush to leave the backstage and grab a bite to eat or a drink with a leading lady. The smell of the cosmetic lingering on the tissue of the fabric. Jolts one back. The impossibility of remembering the director's choreographed blocking of one's precise position in the tableau. The thespian has left the theatre. The memory has slipped away in the same manner.

Yet what perturbs is not the umbral nature of memory shadowing the event itself. It is that the actuality of the event itself is little more 'real' in how it is constructed and plays out in live time. If memory can only capture and embalm a soupçon of a happening, the happening itself fares little better in terms of apprehension. 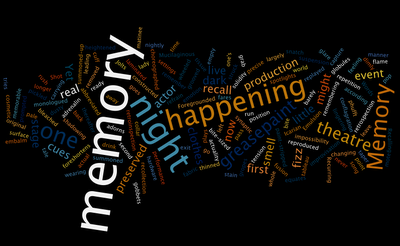 The dusty mote of the memory. Bombinating around the decreasing waxy wax candle. The Icarian coalescence with the flame, hiss, hisses phufft. Shot down in the blaze like one feels darkly for the recall. The returning memory of appearance ready in memory of the collection does not sharpen 'C'.

Memory is made thin. From color Drawn off emulsion. Gallertartige suspension of an event in bite-size lump. Mucilaginous globules, preserved surface tension, until they go for bang, requested to the review. It would never happen retroinspection concerning the detail. Everything is shortened.

Because memory signs in perspective. Foregrounded synaptic unions. Memory is not a rolled out fold. If is not the accidental accessed memory of the hardware. It is non-locatable and barely locutable.

Memory becomes by headwords arrange. One held a word, a smell, the clothes. The refrain of a song, a feeling. These are the headwords which are marinated and are preserved. It has the feeling of a stage production, turned night after the night according to the afternoon image after the night. And then the sentence is hit as the theater goes darkly up to the following production.

The première adrenalin which carries out the original achievement, the second night flatness, gerillte, unconcerned repetition for the length of the run. The event was that a première, the recollection this of the bad-distinguished versions afterwards. Memory as the empty curve of the repetition.

Recalling the settings for the memory, as they have the whole solidity of stage apartments. Words played every night according to the writing, now mainly forget again, although the actor could remember snapping, or a requested feeling. If one tries to recall now, there is improvisation, extemporisation, decoration of the fairy tale because the dialog cannot be completely produced again. Everything is monologued, he said, she said.

The greasepaint decorates no more, raises, hyperbolisch under the floodlights, as the living event would be selected even as unforgettable. And, nevertheless, the real Faszie of the memory corresponds in addition if the theater is dark, everything except the exit and security lights bolting. As the actor the greasepaint, his qualities pale has removed and has bleached by the garish light. There could be oleaginous Schminke-Fleck on the cuff or collar of his real world clothes to leave in a hurry changing, in order the Hinterbühne and to seize a bite to eat, or a drink with a principal character. The smell after the cosmetic which stays on the fabric of the material. Shakes a back. To remember the impossibility, to choreographed blocking of the manager of somebody of precise position in the painting. The Thespisjünger has left the theater. The memory has escaped in the same way.

And nevertheless what interferes, the umbral nature of the memory shadowing the event is not. That is it the actuality of the event is a little more real in it as it is built and exhausts in the living time. If memory only can win and embalm a track of an event, the event even driving money a little better in relation on the arrest.

with many thanks to Dan Holloway for the idea of a word cloud and Matthew Temple for the re-translation idea, without both of whom this piece would not have been possible.
Posted by Sulci Collective at 19:53

Very interesting piece. It reminded me of our conversation about quanta and the wave/matter dichotomy. It also felt like an abstract painting, or an Andy Warhol. Can't decide which.

Abstract expressionist I'd hope rather than our Dandy...

Stunningly effective. I love this!

Very cool. Love the word cloud and the deutsch translation. It's kind of performance art, but with words. And bombinate! Yes! Peace...

I love this. Brilliant!
Pen

My first thought was 'wordgasm!' But I have to go a little further than that.

There's an anxiety playing out here - an anxiety of language (and memory), that is a breakdown in reverse. A bit like watching someone grasp for the 'right thing to say' as the words circle around him. There's panic in it.

In every construct there is the formula for its deconstruction - something I always appreciate about your pieces.

Thanks DJ, I think that last sentence in the comment was possibly the nicest thing anyone could say about my work. :)

I'm not sure why but this sentence just encapsulated it all for me; "Recurring memory of occurrings not ready for recollection at collection point 'C'." Perhaps it's a latent phobia of Argos, but it just truly summed up how the brain processes memory (that's even before the memory is ready for collection, only to find it's the wrong one)

Bombinate - LOVE that word! And how effectively you used it, and all the rest, to show how precious memories are. One of my favorites Marc.

Very cool story, and quite a unique way of presenting it.

Wow. It's like an explosion of word and thought that makes me want to start grabbing all the bits and putting them back together just so I can make explode again.

Word and idea emersion...this was quite a trip...it's beautiful...and I loved the picture that you included with it.

As always I'm left stumbling over my crude vocabulary in order to summarize how I feel after reading your masterful works. Well done sir.