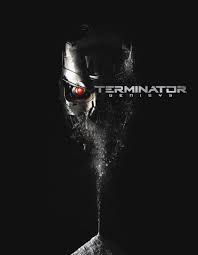 I'm a huge fan of "Terminator" so much so I paid homage to it in one of my novels. "Terminator 1" would be in my all time top-ten movies. "Terminator 2 - Judgement Day" had a few flaws, but the Terminator (the new improved T-1000 that could alter its own molecular structure to flow as well as move like a solid) itself was an extraordinary imaginative creation. "Terminator 3 - Rise Of The Machines" put some more meat on the bones of the backstory, how SkyNet arose in the first place to start the war of machines against man. "Terminator 4 - Salvation" was pretty poor in the same way as "Godfather 3" let down the side after its supreme two prequels.

And now we have "Terminator 5 - Genysis". A pretty redundant exercise in every one of its aspects. It brings nothing new to the franchise, in terms of plot, world-building, visuals or characters and some of these I believe has actually made a retrograde step. The film ostensibly tries to knit together narrative strands of all the previous movies into one coherent story across the timelines inhabited by those films. But what it ends up doing is a sort of "best bits" mess of a movie, plucking familiar tropes and scenes and referencing them in a way that isn't lazy so much as unimaginative. For example when the protagonists travel through time they are encountered by three street punks as in "Terminator 1". But there is no confrontation, and the naked time travellers come by clothes without having to battle anyone for them.

The time travel paradoxes are never really explained satisfactorily, despite the brining together of all the various timelines of the other movies. Not only that but the original terminators, the T-800 (from T-1) and the T-1000 (from T-2) seemed to have become really weedy in the interim and both are dispatched really easily by pretty unremarkable guns. This movie does see a new breed of Terminator, the T-5000, which is pretty similar to the T-1000 in its powers (and nigh on invincibility), but is more of a human hybrid than its predecessor. I won't spoil it for you by telling you which human populates its character. But again there is the issue of what it's doing while the human characters take a time out in the movie to stock up on guns and discuss their tortuous personal family relationships made complicated by time travel. One can only assume the T-5000 is oiling itself or filing its nails or whatever Terminators do on their down time.

But most jaw droppingly scandalous itself are the characters. Gone is the Amazon warrior Sarah Connor played by Linda Hamilton in T-1 & T-2. instead we get someone who looks like she breezed in from "Twilight" or "High School Musical". She might posture hard, but disturbingly there is more sexual chemistry between her and Schwarzenegger's friendly Terminator who she calls Pop and basically reared here as a child in this version of history, than between her and Kyle Rees. Utterly unbelievable no matter how much belief you suspend, considering he is 67 years old and she looks like she's 21. This Sarah Connor has lost the spur of doing anything to protect her son and instead is looking after her old Dad, who happens to be a Terminator and reasonably adept at looking after himself. It just doesn't work.

The film also references either visually or in idea films like "Speed", "Bladerunner" and "Avengers", when the "Terminator" series has always thrived in its own visual and imagistic presentation that makes it stand out from other films working in the same arena.

So this film has nothing to recommend it to either die hard fans, or those coming to the franchise new and wondering what the fuss was all about. Save your money, watch "Terminator 1" on YouTube and read my novel "Time After Time" instead.
Posted by Sulci Collective at 22:27

Somehow I have made it through life without ever seeing any of the Terminator films. After this review, and after my own bad experience with the latest Mad Max film, I think I am going to take your advice and go the YouTube route.

I really liked T2 and I sort of lost interest in the two films that came after, so I was VERY skeptical about this one. Now I think I'll wait until it's on TV...

From the trailers I saw I pretty much imagined it to be just like you stated here. As much as I loved the first two movies the rest have suffered from sequelitis. But then this also goes into a longer rant I have about many of the modern movies we have in front of us now anyway...