She had the bagginess removed from her eyes, but as she also had a facelift to banish her wrinkles, the tightened scalp only served to bulge out her peeper from the thinned skin.

All the rhinoplasty procedures on her nose had denuded the cartilage until the nasal vestibules started rising back up until the whole structure fell off the central axis to one side of her face, just like her favourite pop star who she modelled herself on.

The second Botox had never worn off, freezing the whole lower half of her face in an incessant rictus.

The silicon implants in her breasts had started to leak and necrotised the flesh of her chest.

Augmented by her tummy tucks being unable to withstand the constant stuffing of nourishment causing her abdomen to burst and her viscera to hang out of the cavity. She was no longer able to stand fully upright.

Apart from the patches of burned skin around her buttocks, the liposuction had removed so much cellulite that her muscles were tightly smothered by their subcutaneous layering, starving them of oxygen entailing that her movement was sluggish and laboured.

The only flesh being consumed was her own.

if you enjoyed this alternative take on the zombie myth, you may also like the take on the werewolf myth "Lupus" 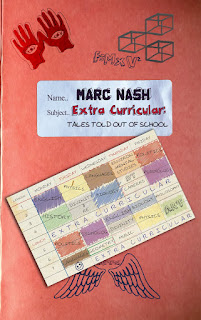 Posted by Sulci Collective at 12:22

I thought she was still alive and just zombie-like until I read that part about the viscera hanging out. Ewwwwww!

The best-looking zombie in the pack, though!

This reminded me of one of my favourite scenes in Absolutely Fabulous, where they joke that plastic-surgery-obsessed women finally get exactly the look they want when they're long dead -- a skeleton with two sacs of silicon lying on top of the rib cage. Nicely done.