What Election Campaigns Fail To Communicate

A Party Manifesto is a curious beast. It offers policies on almost every issue that effects a nation, or if not policies, a stated ideal. But no Party ever wins an election and then delivers every item. Also do supporters agree with every single policy outlined in a manifesto, especially given how broad a spectrum of political values and views the major parties represent within their membership.

This election more than others I can recall, has also seen that rather than the detail of a manifesto, the thrust of the campaigning is to associate your party with just one or two key values, or to associate the other lot with one or two key values; 'Tax and Spend' the Tories accuse Labour of. 'The Nasty Party of welfare cuts' Labour try and dub the Tories. It was curious how we had a phoney war beginning of the campaign, when we were drip-fed one policy a day by each party, because the manifestos weren't out. We had a 7-leader televised debate again before any had launched their manifestos. Manifestos seem to have become less and less significant. I wonder what the percentage of the voting population is that have read at least one manifesto? Tiny I would imagine.

In the past I have spoiled my ballot paper by writing 'None Of The Above' on my ballot paper. Mainly because there was no protest party I could vote for, since only the three main parties stood in my constituency and I simply couldn't support any of them with my vote. However recently other parties have started standing here (representing how these parties are standing right across the country). I voted Green in the last couple of ballots. I was intending to do so again this time round, when I noticed a twitter debate about one of their policies. They were proposing to limit artists' copyright to just 14 years after publication/performance. That is after just 14 years, the author ceases to own and control their work, but is free to view/perform for anybody. Currently copyright only ceases 70 years after the death of the artist. As a writer theoretically I'm affected by this. But since I only earn pin money from my work, losing control over my back catalogue wouldn't really affect me financially. But for artists whose income rests on their creations it would seriously affect their livelihoods. Plus copyright for 70 years after death allows the provision of a financial legacy as well as the artistic one for a couple of generations.

However, this policy as outlined here is completely ripped from its context. Whether you agree with them or not, the Greens are offering a genuinely radical vision of society. Labour may mouth platitudes about equality, but the Greens lay out a theory of change to enshrine this. They seek to remunerate all citizens equally, (a citizen salary if you will), which means getting away from the aspirational culture of job status, materialism, consumerism, all underpinned with conserving the rapidly depleting resources of the planet. If this has echoes of Communism to your ears, you're not far wrong; one of the things that ultimately brought down Soviet Russia was absenteeism and poor productivity in the workplace, because the workers were completely unmotivated. If a Doctor has to train for seven years to qualify, what is his incentive if he earns little more than a waiter?

The policy limiting copyright falls under this template for society. Private ownership is not community minded. Art should be accessible and available to all, for the enrichment of society as a whole. And this to my mind embodies the whole problem of the Green manifesto. They have to get across the whole vision and the rationale for it, so that releasing sound bite policies such as copyright just makes no sense. And it is so radical a vision, it is a huge undertaking to convey it to the populace at large. I have seen no evidence of this being undertaken. Possibly this is because the main conduits of press and media are not giving them much exposure as a minority party. But the message isn't getting out there, so they come across as looking like killjoys armed with a quiverful of policies attacking random social groups.

I mentioned that to some their vision for society may smack of Communism, but it also shares certain ideas from Anarchist theory. In my youth I read a lot of Anarchist texts and developed my own ideal for society. And in many ways it shared much of the Green vision, only I imagined it could only operate in a society in which work was minimised through automation, so that we dwelled in a leisure economy; free to spend our time socialising, making art, playing sport or just thinking and enacting ideas. In such a model, private production and ownership of art would make less sense if we were all at it. Therefore copyright might have had no real place. But the Green model still quite rightly assumes a working life for citizens (technology seems to have created longer working hours for us all through the drive of the market and fear of losing our jobs, rather than shorter ones), therefore the context for art does not change significantly from what it is now in a free market economy. The Greens pledge in the manifesto to invest heavily in the Arts, perhaps as a fillip to us artists cheesed off by losing ownership of our work in under a decade and a half. Therefore in a way they are not pursuing all that radical a version since they are still operating a capitalist system, just one with many limits and constraints.

So the bald statement of a limit on copyright turned off those in the artistic community who thought of voting Green this time round. The counter to that of it being a piece in a large jigsaw to radically transform society completely got lost because that larger vision has not been rolled out to the population in any significant way. But even when one takes the time to consider the whole picture proposed by the greens, I'm afraid they fall short and the copyright issue perfectly illustrates as to why. To my mind, their whole approach smacks of the influence of the Occupy movement. It's all very well holding discussion groups under canvas and batting around ideas, but unless on leaving those encampments you go and spread the word, they will not magically percolate into the mainstream. There is an exclusion and elitism about such an approach, that somehow if you don't join you don't get access to the key ideas to the magic kingdom. And while the Greens have knitted together many ideas into a coherent (if challengable) theory, not many of these ideas are actually new. that's what Occupy failed to see, as they imagined they were the first people to have such ideas and to be working on them in a uniquely creative way. I did my own work on this in my teens, since these ideas have been around for many decades. And still few in that camp have gone out to spread the word and preach the vision.

Sorry Greens, you've lost my vote even though temperamentally your vision is closest to my own. It took a bit of reading around the policy on copyright for me to reach this conclusion, rather than the threat to copyright itself. I've seen it argued that parties with no chance of getting into government don't really need a manifesto representing a raft of ideas they won't ever be called on to enact into law. This is debatable as through the exigencies of coalition government that we are likely to be faced with, smaller parties will actually have a shot at forming a government. But one thing is for sure, the Greens so want to transform society, the odd policy from their manifesto adopted here and there is not really what they are about. They of all parties DID need to produce a manifesto to lay out their wholesale vision. And it is the complete manifesto that ultimately sinks them in a way it doesn't for other parties who will blithely ignore or rescind great tranches of what they promise in their pages. 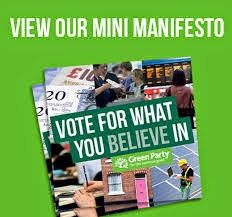 Posted by Sulci Collective at 21:46