Why UK Citizens Join The Fight In Syria

Yesterday two young men from Birmingham were convicted of fighting in Syria and returning to Britain and planning terrorist acts with the training they'd received. Also the identity of two 16 year old girls who had left Britain to join the war in Syria was also revealed. These girls had achieved great success in their school exams, so we are not talking about the vulnerable minds of people who cannot think for themselves here, just as the evidence to membership of religious cults shows adherents to be well educated and in search of something more in life which is why they join up.

So currently we have much hand-wringing about how elements of our youth become radicalised and want to fight in Syria. We enjoin their spiritual leaders in british Mosques to help stem the flow. We appeal to their parents to be vigilant for signs of radicalisation in their children. Yet none of these agencies really can penetrate the mindset that motivates these kids and they really are kids at age 16, to enlist in a foreign war. "Know thine enemy" is a crucial facet of success in war and most people don't have the first clue with what they are up against here. Hand wringing turns to open handed shrug.

The Birmingham men were only caught because one left a message for his mother and she took the emotionally wracked decision to report him to the authorities, as the government are calling on people to do. But without that letter, would she have had any idea that's where her son had gone after he set up an elaborate screen to suggest he was visiting Turkey? The mothers of two of the British boys featured on an ISIS recruitment video revealed last week said they had no idea their sons had joined up to fight. Parents don't know. The authorities don't know, how can this be?

It is well second nature for these recruits to lead double lives. In my book "Not In My Name" I offered a fictional journey for a youth from middle class Yorkshire to suicide bomber. I explored the myriad of identities expected and forced such a person and which he could inhabit while all the time having other motivations really in play.

The pressures are as follows:

The word "jihad" means (spiritual) struggle, usually denoting an inner questing, but which in certain interpretations has come to stand for an external struggle against enemies of Islam. With such different identities foisted on these young men and women, they are already engaged in inner struggle from an early age. An external identity and cause conveyed by the likes of radical Jihad can unify these disparate strands and provide a unity of vision and self. The British authorities can wring their hands as much as Imams and parents, but they make no move to dissect these social pressures and conflicts that start the journey for recruits to Jihad. Our society is fundamentally alienating to people with such values so that they have no ties to Britain which enables them to both leave to fight abroad and maybe to return and wage war here with a terrorist act. It behooves us to examine our own values and how that may alienate certain people to such an extent they have no stake or value in our country. You don't have to agree with such alienation, but you sure as hell better understand how it arises. It's nothing new, the 9/11 bomber Mohammed Atta described his own alienation in the West very clearly. It's in any recruitment or suicide video from a Western youth.

Again my book looked at all this and did not cast judgement. It had a range of voices, from the Muslim protagonist himself, his patsy (the novel represents an online grooming, but not for sex but for terrorism, to provide a witness once the suicide bomber has perished unleashing the dogs of the media to track down every last detail and link on this veritable innocent who had an online relationship with him), an intelligence whistle blower, and the whole blogosphere where the real politics is being fought out in a vicious battle for recruitment to causes and a battle for hearts and minds. The book's analysis is intricate and complex, but does penetrate the mindset of people who would blow up their fellow countrymen by strapping explosive to their bodies.

"They market death as a lifestyle. Conferring an off the peg posterity. Of soldier; freedom fighter; liberator; hero; martyr; patriot; bomber. When life circumstances have prevented the volunteer from being secure in the roles of lover, father, son, worker, provider, man of leisure. Such appeals strike at the very core of anxiety and neurosis. Become a sapper rather than merely sapped." (from "Not In My Name" 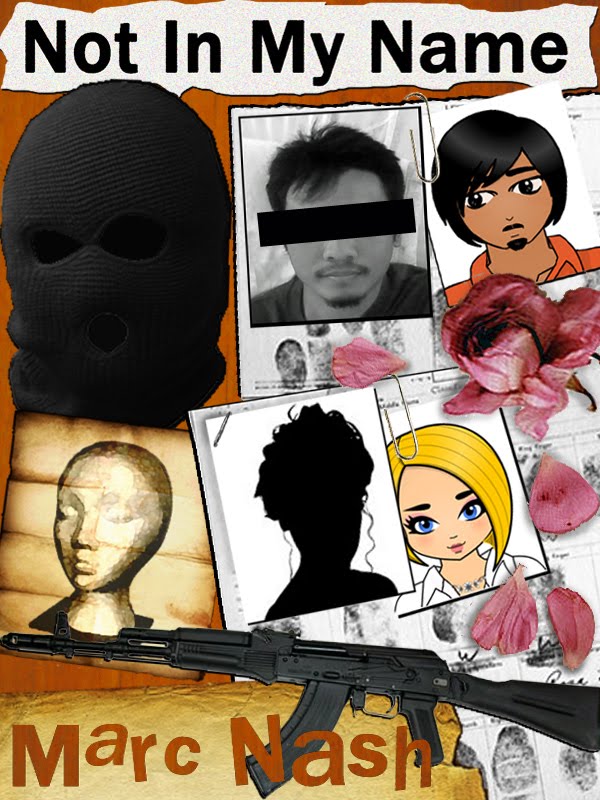 Amazon UK
Amazon US
Posted by Sulci Collective at 09:37