A Round, A Bout - Friday Flash

As she approached the rope, she realised she hadn’t had a run-through. How was she supposed to make her entrance? Torso first and slide her legs round, or posterior backing into the ring? Either way she suddenly cottoned on that her flesh was to be exposed. Ass cheeks from the frontal approach, cleavage amplified by gravity with the rear-first method.

A large dinner suited man with flattened nose and spread ears had stretched the lower and middle rope apart for her. She briefly thought back to when she was a child and two friends would do similar with their skipping ropes for her to hop through. The adult her chased this fleeting image away with the notion that the ropes depicted an interference wave pattern. What the hell was she a Physics Graduate doing here scantily clad in front of thousands of men baying for blood and a glimpse of distant female flesh? She needed the money, perhaps as much as the boxers all things being relative. Her looks had always meant folk dismissed the abilities of her scientific brain at college.

Her somewhat ungainly scrambling through the ropes was still accompanied by the excited chatter dissecting the previous round of pugilism the crowd had just witnessed. A low throb of testosterone-driven descriptions of punches and bodies reeling from the impact. Yet the instant she erected herself, that statuesque moment before she started her circuit and held the rectangular board bearing the round number above her head, the tonality of the crowd rose a couple of octaves and the wolf-whistling began.

She cranked her lips into a smile and began her swaying walk. The board wasn’t heavy, but it affected her centre of gravity and dragged enough air resistance to impart a natural wobble to her gait, which she supposed was the point. The crowd didn’t need informing what the next round was, the giant stadium board over the centre of the ring told them that. Her task was a gratuitous one, to turn the minds of the throng from the bloodlust to the well, just lustful. To prick any crescendo of belligerence aroused by the sight of two men beating the merry hell out of each other. A similar reliving role that comedy played in the original Greek tragic dramas.

As she walked she realised she was not as cold as she feared she might be. Beneath the lights, her raised arms and upper body were clammily hot. However from the waist down she was shivering, with goosebumps populating her legs, exacerbating the tilt of her stride. She identified with the boxers who formally demarcated the two halves of their bodies with a belt. No hitting below its stamp; a gathered target presented above. Out of the corner of her eye she saw a water bottle being squirted towards a boxer's groin by one of the cornermen, while the other was yanking the elasticated band of the boxer’s trunks away from his sculpted abdomen. She averted her head, confused by the strange inverted directionality from the usual fluid flows from such male nether regions.

How tight a circuit was she supposed to transcribe? Too tight to the middle and she would be done in twenty seconds. It might also appear she was soliciting the referee stood there in the middle of the ring. Too wide an arc and she risked getting snarled up with the feverish activities in both corners. There were pools of water, possibly with blood mixed in, radiating slowly out from underneath the boxers’ stools. She didn’t want to be getting her shoes tagged in that, even though she had been provided them by the event promoters. God her arms were heavy under the weight of the board.

She imagined that some of the noise from the masses bore a particular pique, because round six, that number she was toting, signalled the death of their bets on a definite result in round five. These punters were now thrown back on a diffuse partisanship for one or other of the fighters, now that their main investment in the outcome had gone by the wayside (ringside?). Her board symbolically represented the guillotine, the knockout blow that ended their hopes. The boxers may have cuts and gashes on their faces, but she had the transposed blood of some of the defeated audience on her board. She shuddered and tried to focus her hearing even tighter for any hostility towards herself.

She had reached the other corner now. Even though she consciously steeled herself to give the men busying themselves there a wide berth, she found her path naturally veered towards them. Like two planetary masses coming into alignment and warping the space between them, she was drawn into their gravitational pull. The boxer was sat low on his stool, his legs splayed out long in front of him to the canvas. She couldn’t tell if he was slumped or nonchalant. The raised welts and crusted blood ridges around the cuts on his nose reminded her of the slightly worn or frayed fibres of the rugs her Grandma used to hand weave. The boxer raised his eyes and winked at her. Either that or he was trying to purge some water or sweat that had dropped into his eye from his teeming crown. She speeded up her step to get her past the black hole of the corner.

She had completed her circuit. She wasn’t sure if she should keep going. Was there time to complete another lap? How long was the break between rounds supposed to last? She had lost track of time during her perambulation and assault by all these jabbing thoughts. Goodness alone knows how boxers adjudged the duration of a round when they were being assailed by punches, yet she couldn’t even do it merely holding a board aloft. She widened her smile to no particular purpose, as both boxers distended their on mouths in order to reinsert their gumshields. The same man pincered open the ropes and beckoned to her with his flattened nose and flapping ears also seemingly directing her to between the ropes.

Ding-ging, saved by the bell. 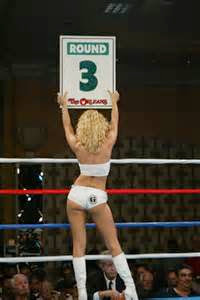 Posted by Sulci Collective at 17:20

Not being a boxing fan, I'd rather watch a pretty girl walking round the ring any time, much preferable to seeing two guys slugging each others brains out. :)

Amusing line of thoughts. A girl needs to pay the bills, and decent physics gigs are few.

I didn't realize how much went into walking the squared circle with the round number card. She handled it like a champ. Good story!

Never liked the treatment or presentation of ring girls.

Damn. I didn't know boxing matches had ring girls. Clearly I've never seen one before. But it seems to me a big LCD screen would too a better )ob of displaying the numbers.

The poor girl appears to be too self-focused, and can't seem to shut the brain down. Still, what else does she have to think about—except everything, that is—with a job so mentally stimulating? Nice stream of consciousness here, Marc. I enjoyed trying to keep up with her thought process. Thanks for sharing.

I'd never thought about what it must be like for the girls with the board, but this was fascinating!

This reminded me of Rita Hayworth doing the "Zip" number in Pal Joey. I love the idea that someone could be thinking about waveform patterns in such an environment.

A very entertaining and thoughtful post. From the ring entry conundrum to debating the circuit - I loved the inner struggle that was created by the awkward external environment. Great job!