Not In My Name - Excerpt

I was struck today by the debate raging over Facebook's decision to reserve the right of its users to post beheading videos depending on their context. I wrote about this in my novel "Not In My Name" which is all about the new politics shifting to the online world and which is far more vicious than any other public political discourse.

Below are two excerpts from the novel around the subject:

How can you criticise beheading videos on the internet, when during the invasion of Iraq, the US military would release footage of its surgical air strikes on mainstream TV news programmes? Both show ferocious acts of killing and the last moments of supposedly sacred life, just one appears in close up. Do you not realise that both seek the same outcome, that of enlisting support to their cause? We’ve moved on from baroquely moustachioed Lord Kitchener 'Your country needs you' recruitment posters. Telescopic military videos are designed to becalm its target audience with the detached, scientific nature of precision warfare, whereas the beheading videos are meant to stir the passions of its gallery. We cavil because it seems so barbaric, but they equally regard our methods as both cowardly and uncivilised with its ravaging of civilians. If we persist in such hypocritical myopia, how will we ever evidence the judgement necessary to resolve this clash of civilisations beneficially to both houses?


Eyes cast down, neck braced by the woodImpressed grain logs the ineffable ruling.Court artist sand, worm’s upraised viewingDeath mask imprinted with my blood. I blanch while the ascending ground darkensTrading places, I divine sacrifice not martyr.

In the arena, a recount of the charges My basket case nerves nod mute accord. There is no bucket beneath to slam dunk Neither Jacobin traitor, nor political agitator My poll will not be mounted upon any pole. All glassy eyed it will be held up highRevolved around, to be cheered all four sides.
My lolling tongue and foaming maw Are requested to shape the words of Shahada.Lip service paid now, whence in default beforeChurlish to supplicate for a miracle. I hear the soft sandalled tread An executioner’s shadow enshrouding As the sword’s molecules dash on deck Each anticipates bloody anointing.

I shut my eyes, no desire to see The separation of my apostate head, From my mutinous body. Instead, An involuntary prayer, to whom I am unsure.I hearken the shimmering swish of a scimitarPerceive behind a field of dancing light.Beauteous spectral wake as blade parts the air.Not taut like steel, but floppy greenLong-stemmed bloom presented afore me
A declaration of love, gift of life Revivifying my enervated senses. I unfasten my lids, unshutter my gaze Winch my head up from the stump And view only the one, you my love As you drop your veil, to reveal A different red hue sun glinting. You shake away the baying dogs With a sweep of your head Your welcoming arms grant private audience

I stand and stride, a little shakily No mirage you, unflinching in bearing A cradle of acceptance Perfectly tailored for my body Hands safeguarding my bare crown. On approach they spangle and changeNow palm fronds provide our joint canopyMy bride elixir births me anew Returns me to my root safely.Intact, yet only half a man stillUnblockishly lower my gaze and modesty 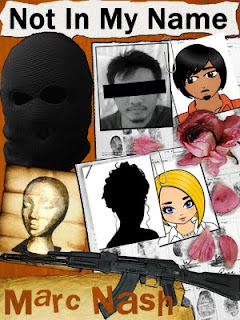 On today's issue my personal thoughts are as follows. Beheading videos are created only for propaganda purposes. Facebook will not permit them being posted for the purpose of advancing a cause or trying to incite commitment and recruitment. I don't really see how representing these videos in a critical fashion can be beneficial to any public debate on the subject of terrorism or violence. Beheading is a bad thing, go figure... Also the act itself is a crime, a beheading video is a record of a crime while it is being committed and that must have legal implications I would have thought. I know happyslapping and joyriding videos abound online, but this is a far more extreme crime. It is the equivalent of snuff porn and that wouldn't be allowed online. Is the only difference that in a beheading video the victim has their clothes on, unlike a snuff movie? I say this not with flippancy, but as has been pointed out today, Facebook comes down heavily on breastfeeding images because of the nudity.

Sorry, I just don't see any circumstance where showing a beheading video promotes any understanding of the issues

Posted by Sulci Collective at 22:50

Perceptive and well-argued as usual, Marc. Not being on FB, at first I wasn't sure if "beheading" wasn't slang I didn't know. When I found out it was quite literal and real, I thought, "But didn't FB just promise to clean up its act?" I wonder if they'll ever truly get it.