Let me tell you why this image fills me with despair. This is a shot of customers queuing outside Nike's flagship store in the West End of London, on its first day of reopening after certain restrictions on lockdown were lifted. They don't seem to be observing social distancing, though I know the store has taken precautions to institute it. The virus that has claimed 40,000+ lives in this country, is seemingly outweighed by the need to purchase a new pair of sneakers. But they're all wearing masks Marc. They are indeed, masks certainly help, but they do not guarantee protection. That means they impart false confidence, people get sloppy in their habits. Besides, I don't get the sense of the folk gathered here having made calculations of their own personal risk. Swishy-swooshy shoes out-trumps that.

Now I get that it could be viewed as an assertion of freedom, that finally we have been released from virtual house arrest. But to me it rather serves as testimony to being enslaved by corporate consumption. What could be more important after 13 weeks than buying the latest Nike models? Did all their shoes fall apart under lockdown? From all that exercising they probably undertook (irony klaxon). Equally, did all the folk waiting for entry into Primark (below) have to replace clothes that had succumbed to being moth fodder in the last 3 months? 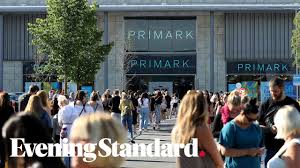 How do you best express your recovery of freedom? Apparently you go out and look to buy goods that are not perishable in the short-term as food is and which have been branded as non-essential for a quarter of the year. It demonstrates the stranglehold certain goods and logos have on our imaginations and desires, that they become our first course of action, the number one thing we reach for in the outside world. Consumption is a declaration of who you are, but only after having had your independence of choice utterly manipulated by the marketing of these brands as 'the must own' or 'the latest model'. The same shrivelled imagination that left some people completely unable to make their own entertainment during lockdown, because they've always had somebody else or something else do it for them.

And yes we all want to support our local stores and to help reignite the economy that has slumped since March. But I can't help feeling such altruism is not high on the shopping list of these consumers. They are feeding their own appetites first and foremost, so that any assistance to the country as a whole is somewhat secondary.

Typically it's women who are said to be obsessed with shopping and particularly shopping for clothes. But the majority of those outside Nike are male. I think there is probably something about their identities and how they see themselves, that they have to associate themselves with global sports brands that axiomatically stamps them as athletes and men of prowess, even if they don't chase after balls or hit things with bats. It's that same drive that makes you want to have the latest Apple product that replaces last year's model. A Frankenstein's monster patchwork of globally available, logo-driven identities that supposedly constructs your unique, individual essence. And makes you feel totally invulnerable. Against a virus that takes no notice of brand names.
Posted by Sulci Collective at 19:52 No comments: